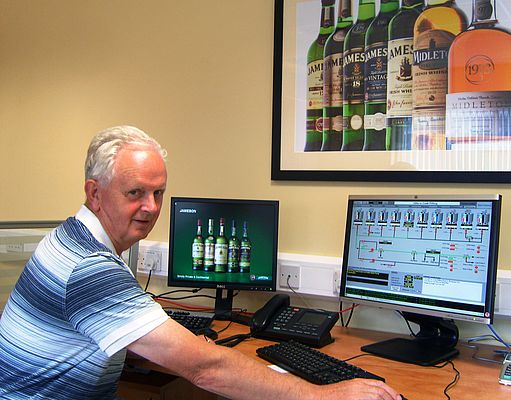 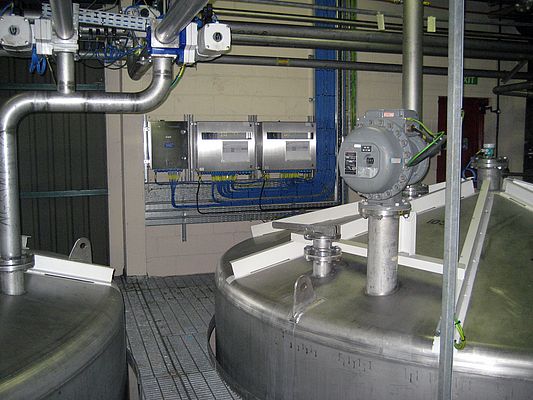 In the Irish Distillers whiskey distillery, a remote I/O proves that traditional manufacturing processes can also benefit from state-of-the-art Fieldbus communication. Using remote I/O panels as the new automation cabling meant they could be installed without obstructing production.

According to the legend, Midleton is the birthplace of Irish whiskey. Even today, the heart of the Irish whiskey industry is still beating in this small town south of Cork. Close to the historical Old Distillery, which still serves today as a museum, the Irish Distillers Limited (IDL) produces the most famous distillates of the Irish republic, including Jameson, Paddy and Powers. The traditional manufacturing process has since recently been supported by the latest I/O technology: Twelve excom remote I/O stations from Turck ensure the safe and transparent communication between the control system and field devices in Ex zone 1.

The old automation system in the VAT house consisted of three ITT PLC systems, with conventional wiring via barriers to the hazardous area. Irish Distillers have previous experience of utilizing fieldbus with Profibus DP and PA networks installed elsewhere on the site, and so it was not surprising that it was decided to utilize Fieldbus in this upgrade.

DeviceNet was selected for use with Motor Control Stations, and Profibus DP for communication of all field automation signals. Irish Distillers selected Turck's Excom Profibus DP for zone 1 hazardous areas as the best solution for the interface of the automation signals. Turck excom systems were supplied by Turck's Irish Distributors Tektron, based in Cork, Ireland, who also provided technical advice to the project.

Mick McCarthy, IDL E&I Manager for this project, selected excom over other Hazardous area remote I/O vendors, "due to the high density that can be achieved in the MT18 module rack. The hot swap functionality also impressed us, as we can now remove and fit all modules during ongoing operation - without having to interrupt fieldbus communication." Another benefit: the automatic adjustment of power from the DO40Ex digital output card regardless of the voltage and current enabled IDL use this single type of I/O card for all Digital Output cards thereby reducing specification and design engineering.

LED indication for every device on the rack was another feature which led to excom being selected. The Turck stainless steel field panels have a viewing window to allow the operator or maintenance engineer see the status of a card or channel without opening the door. IDL have taken this a step further by fitting a printed matrix to each door, which details the card and channel no, identifying the relative instrument tag number.

The project size was in the region of 800 I/O, with the integration works carried out by Rockwell Engineering, Cork, using an Allen Bradley PLC. The Project required 12 new excom remote I/O stations (MT18). To ensure the maximum speed available (1.5 MBaud) could be achieved, four Turck SC12Ex segment couplers were used, providing four sets of redundant intrinsically safe Profibus segments in the field, which allowed the design engineers ensure that the maximum Profibus DP cable length was less than 200 m. The Remote I/O panel locations were selected to ensure good distribution and that instrument cable lengths were kept to a minimum.

The VAT house is an important part of the distillery process. It was critical that as much of the installation work and in-fact testing and commissioning be carried out before disconnecting the existing system. This was easier to implement due to the use of excom remote I/O panels as the new automation cabling could be installed without obstructing production.

Irish Distillers now have the capability to utilize the diagnostic tools available to them over the Profibus Network. Channel, Module and Panel diagnostics are now available via the Allen Bradley Master and can be visualized in the new control room. The operators and maintenance staff now have a more efficient plant, and will be able to implement predictive maintenance procedures which will assist in increasing the efficiency and the production from this part of the plant.

Once the project was complete, and the VAT House returned to full production, the task of stripping out the redundant tray work, cabling and panels associated with the old system could began. Four large rubbish skips of cabling alone were removed from the site. Areas where it had been impossible to gain access due to large cable trays, were now accessible, making the building a more efficient working environment, assisting in the overall drive to increase efficiency, reduce downtime and increase production.