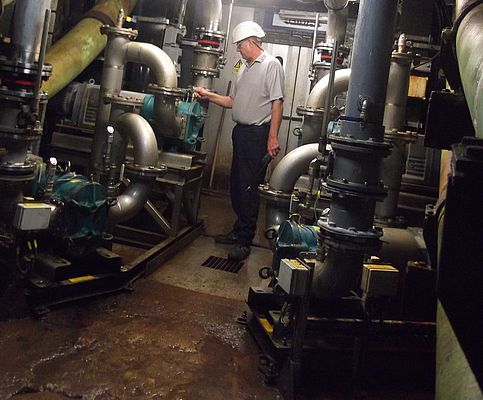 As the first Severn Bridge approaches its 50th anniversary, the millions of drivers that cross it each year will be blissfully unaware of just how crucial the pumping operation is some 70m below the land in the tunnel that connects a vital National Grid cable from England to Wales.

Valued at £80M, the 2.2 mile tunnel is protected by Börger pumps that remove one million litres per day of water ingress from underground springs.  Systems are firmly in place to prevent homes and industry from any power shortages, but the knock-on effect from a total pump failure would cost around £1M to £1.25M  - per day.

Mention the Severn Bridge to most folk these days and they’ll usually refer to the mighty construction that hosts part of the M4, but just to be clear, we’re talking here about its perhaps less glamorous neighbour, hailed as the dawn of a new economic era for South Wales when opened 30 years earlier by the Queen.  This is the first Severn Bridge, slightly further up the river, which now carries part of the M48 motorway.  Deep down in the tunnel with the National Grid cable, it’s a strangely warm, damp, noisy environment where the lights have to stay on and corrosion sets to work amid the somewhat eerie stalactites.

Following a refurbishment of the tunnel a decade ago when the pumping out of the spring water was reduced from two points to just one (at Aust on the English side of the Severn), National Grid has been busy working towards the best possible solution for automated control of the tunnel’s pumping system, as Substation Engineer, Steve Parker, explains:  “We’ve gone from what could be described as ‘panic breakdown maintenance’ – to a controlled, managed quarterly program”, he said.

“This has come on the back of switching from two screw pumps to four rotary lobe pumps made by Börger.  Although this upgrade has involved a capital cost, we’re already well on our way to getting that back by the huge amount of time and labour we save on servicing”.

He added:  “For the screw pumps we’d need a minimum of three personnel just to go down into the tunnel to carry out an inspection that could take at least two and half hours.  To bring one of the pumps out for repair or maintenance required winches, which then became an extremely time-consuming health and safety event, lasting up to two and half days!  Including the cost of two full-time fitters, we’d have to jack the screw pump apart in order to cut the main rotor in half, which overall, was a costly and sacrificial exercise that I considered no longer manageable.  Removal of one of the two screw pumps also left us vulnerable with a single point of failure.  We needed a much smaller, more reliable, more cost-effective and easier to maintain pump regime, which is where Börger came in”.

The installation of four stainless steel Börger pumps, which was carried out by Almax Technologies, has reduced inspection time to just 40 minutes.  For servicing, the Maintenance-In-Place (MIP) feature of the factory-tested pumps means that all four can be stripped down, oil changed, rotors checked, in a day (or less), right back to the gearbox seals.  Fitted with “Optimum rotors”, the 18.5kW Börger units pump out 40m3 per hour at 70m head (7.5 BAR vertical discharge), and have a suction lift of -5.5m.  Only two pumps are in action at any one time, operating alternately on a 20 minute shift system so as to preserve their lifetime.  In the event of a flood, then all four pumps would automatically leap into action – and compared to leaving just one screw pump in place, removal of a Börger unit would still leave three working if needed.  Soft-start inverters get the variable-drive pumps up and running so as not to shock the pipework.

“In fact, it’s been the existing pipework that has presented us with more problems”, continued Steve Parker.  “We’re now changing over from plastic to stainless steel to reduce vibration”.

National Grid is also introducing a new control and monitoring system, which Steve Parker says he held back on until the performance and maintenance of the pumps could be firmly established.  Flow meters currently check on the pumps’ typical 63m3 per hour of water, but the new smart system will help improve efficiency on site even further because a complete history will be available at an operator’s fingertips, with graphics to study trends and much more – accessible via a smart phone if required.

Steve Parker concluded:  “Compared to the saga of servicing our screw pumps, all we need to get at the Börger pumps are basic tools, which can be taken down into the tunnel with ease in a small holdall.  The simplicity of the Maintenance-In-Place feature is a real benefit - four Eye-bolts on the front of each pump – and the pumps themselves are rock solid, despite being in such a harsh, almost oil-rig type environment.  They have taken massive hammerings – but been totally resilient. Beautifully reliable”.

Pumps, Valves & Compressors
For use in corrosive environments
Read more

Pumps, Valves & Compressors, Maintenance
Meeting the needs of high temperatures and viscosity handling is a real challenge. ONIXline Rotary Lobe Pump from Börger can handle demanding high pressures up to 16 bar and has no wearing parts
Read more
View all supplier's articles
Advertise with us
Related articles

Pumps, Valves & Compressors
For a long service life and reliable sealing performance in valves, fittings, and piping systems in use with water and many other challenging media
Read more