Autumn is the right time for the annual flu vaccination – at least in the northern hemisphere. South of the Equator, populations are vaccinated in the spring. Twice a year, pharmaceutical manufacturers need to produce millions of vaccine doses in a short time to meet demand for the protective drugs. An internationally active supplier relies on Schubert-Pharma to package its syringes containing the vaccine.

The importance of vaccine availability is clearly illustrated by the corona crisis: When there is no vaccination protection against communicable diseases, human lives are put at risk. In the current situation, however, it is not only research that has to achieve the impossible and develop a vaccine within the shortest possible time. The production of millions of vaccine doses is also a challenge – but one that the pharmaceutical industry has had to overcome again and again. Every year, as the flu season approaches, a new vaccine is produced that immunises people against current mutations of the influenza virus. Since the flu season occurs at different times of the year in the northern and southern hemispheres, this production process is required twice a year. Speed is of the essence in production: Due to the lead time required to adapt the vaccine to new strains of pathogens, there is not much time between the development of the appropriate drug and the emergence of the flu epidemic. To ensure that the flu vaccines can be produced quickly, safely and reliably, a global pharmaceutical group with over 70,000 employees decided to collaborate with Schubert-Pharma in March 2018.

Gentle handling of 400 syringes per minute

One of the most important requirements for the new packaging machine was a gentle packaging process for the fragile glass syringes containing the valuable vaccine doses. The various syringe types consist of 1-millilitre-long syringes with a 16-millimetre cannula and a soft cap, tip cap or hard cap, as well as 1-millilitre standard syringes with a soft or hard cap. In order to package the drugs securely, the syringes already filled with the vaccine are placed into trays when they are fed. The loading sequence requires every second syringe to be rotated by 180 degrees so that the syringes are always in opposing directions. This saves space and therefore packaging material. Before this can take place, however, they must be pre-grouped from a hanging, loose feeder into a lying position with defined distances between each individual product.

This task was previously performed by pick & place robots at the international pharmaceutical manufacturer’s production facility. To keep up with the seasonally very high demand, the pharmaceutical manufacturer wanted to significantly increase output: “The entire process should be able to handle 400 syringes per minute,” says Karin Kleinbach, Sales Account Manager at Schubert-Pharma, describing the requirements. The other components of the packaging line have been meeting this requirement for some time now – including several machines from Schubert-Pharma, part of Schubert Packaging Systems, a subsidiary of Gerhard Schubert GmbH. “Since we already operate several Schubert packaging machines, we know and value the company as a reliable partner,” says the pharmaceutical manufacturer’s responsible project manager, who also praises the excellent collaboration they experienced during the design of the feeding line.

The new robot-supported infeed system from Schubert-Pharma now ensures a gentle packaging process for the vaccine doses at the large pharmaceutical company while still maintaining high output. In order to bring the syringes coming from the upstream assembly and labelling line into a lying position with defined distances for packaging, they are separated by two star wheels, which convey the products horizontally into a transfer chain. The first, horizontally positioned star wheel takes the accumulated glass syringes from the feeder. It then transfers the products at defined intervals to the second, inclined star wheel, which transports them further. This way, the syringes are transferred directly and without time-consuming intermediate steps to the designated transfer chain flights. A robot always takes 20 syringes from the chain and places them onto a grouping table with four rotating cassettes. Five syringes are grouped together, then the cassettes are turned through 90 degrees so that they can be placed into the trays provided by a second robot. In the next step, five syringes are again placed on the grouping table; this time the cassettes are turned in the opposite direction. This enables the second robot to place the syringes into the tray 180 degrees opposed to the position of the previously placed syringes, without having to perform a time-delayed rotary motion itself.

A group of four trays each with a total of 40 correctly aligned syringes is then fed by a conveyor belt to a Schubert camera system, which finally checks the correct length, filling and alignment of the syringes, and also ensures that the plunger rod, label and protective cap are present. Trays with faulty syringes are automatically sorted out. Only intact syringes in correctly filled trays are then packed by a cartoner. The empty trays, coming from the cartoner, are transported back to the filling station via another conveyor belt.

In addition to the high processing speed, the pharmaceutical manufacturer was especially interested in gentle product handling and the prevention of glass breakage – after all, the increased output could simply not result in a higher reject rate. “Feeding with star wheels is ideal to meet this requirement, as it is very gentle on the product and precisely matched to the high demands of pharmaceutical production,” explains Karin Kleinbach. The star wheels also ensure flexibility: As exchangeable format parts, they can be adapted to any syringe format. This allows the pharmaceutical company to react flexibly to future market requirements – ideally preparing it for the next wave of flu.

In the service of health

For more than a hundred years, this internationally active manufacturer has been producing pharmaceuticals. Today, the main business of the group, with its more than 70,000 employees, includes research, development and production of pharmaceuticals in the fields of human and veterinary medicine, as well as laboratory diagnostics and clinical nutrition. With the influenza vaccine, the pharmaceutical company offers a flu vaccine that can also be used in children from the age of three upwards. 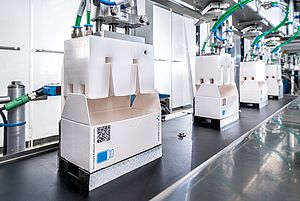 Secondary packaging for pharmaceutical products is subject to stringent product protection and labelling requirements. A consistently high-quality, reliable, safe and controlled packaging is therefore absolutely essential in the pharmaceutical sector. 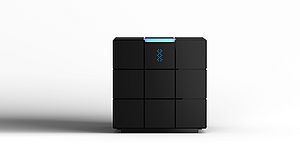 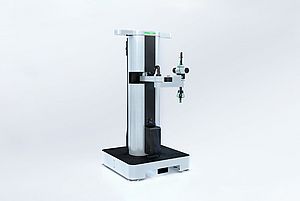 Cobot for the Packaging Industry

use ultrasound for sealing and punching