The new pms ultrasonic sensor from microsonicis a good example for Hygienic Design in food and beverage. To guarantee hygienically sound installation of this new ultrasonic sensor, microsonic its trust in the SKINTOP HYGIENIC from LAPP. 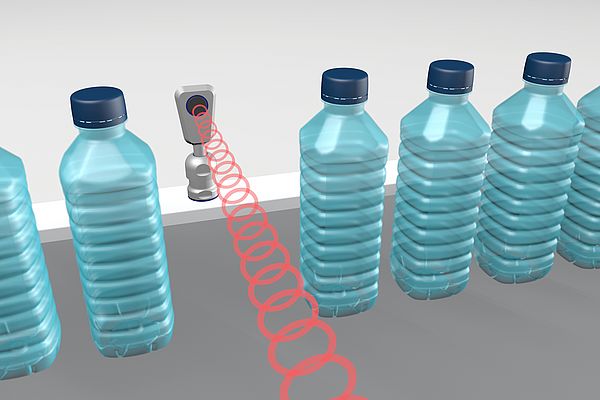 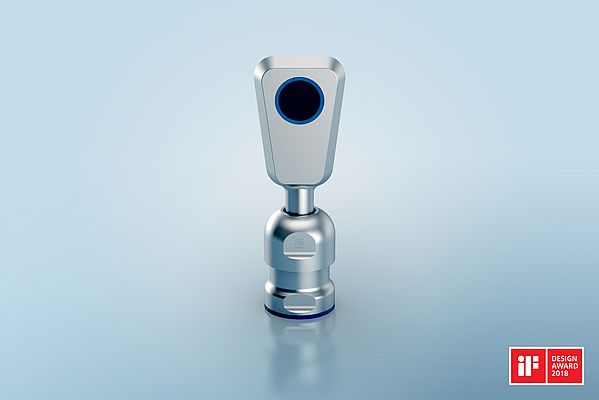 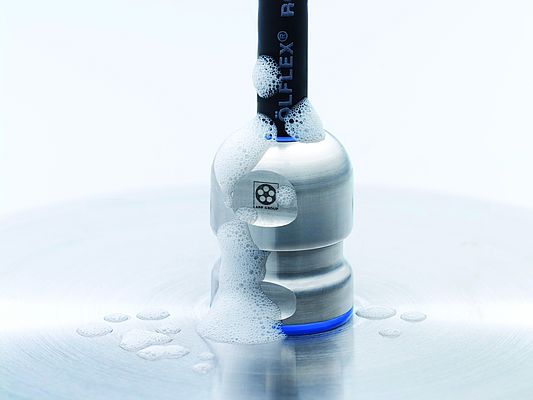 The SKINTOP® HYGIENIC has neither corners nor edges, and may also be used in the product zone for food-processing applications

In the food and beverage industry, containers or receptacles need to be counted and positioned, the flow rate on conveyor belts needs to be monitored, and food that has been packaged needs to be checked for the correct fill level, or that the filled product is complete. Ultrasonic sensors are ideally suited to these many processes as they are able to detect objects irrespective of their colour and transparency. The sensors work in the same way as bats’ sonar: the sensors cyclically emit a short sound impulse and measure the time it takes for an echo signal to be received. Because the speed of sound in air is known, the sensors can use the time measured between the emission of the sound impulse and the reception of the echo signal to calculate the distance from the object, or even the fill level. Sound impulses above 20 kHz are referred to as ultrasound, which is inaudible for us humans.

One leading provider of ultrasonic sensors for distance measurement is microsonic. The sensors from Dortmund are used in a wide range of industrial sectors. One example of these is the printing industry, where sensors are used to measure the fill level for paints and coatings, or to detect the diameter of rolls of paper. Due to the fact that the hygiene requirements with regard to the machinery and technical components used in the food and beverage industry are constantly increasing, the commonly used standard sensors are no longer fully fit for use in areas that come into contact with the respective product. This gap in the market is now filled by the new pms ultrasonic sensors from microsonic, designed in compliance with EHEDG guidelines and constructed from FDA-tested materials.

The unusual shape of the stainless-steel housing, made from material grade 1.4404, is particularly striking. The engineers at microsonic selected a geometry with which none of the surfaces of the pms would be horizontally aligned in any conceivable installation position. Doing so ensures that cleaning and disinfection fluids can always run off. Even in situations where the fill level in a container is measured, for which the sensor measures vertically downwards, the rear side of the housing features an incline of ≥ 3° to ensure that any cleaning fluids are certain to run off in this installation position as well.

The smooth sensor housing does not have any gaps or edges for food residue or bacteria to accumulate in; the stainless steel has a roughness depth of Ra < 0.8 μm. Alongside the sensor design, selecting the right material is crucial. The ultrasonic transducer itself is protected by a PTFE film and therefore repels chemically aggressive cleaning and disinfection agents. The pms is highly durable and ECOLAB-certified. With four different scanning ranges, the new pms ultrasonic sensors cover a wide measuring range from 20 mm to 1.3 m. They are available with a push-pull switch output and IO-Link in version
1.1, or with an analogue output of 0-10 V or 4-20 mA.

Unlike standard sensors, the installation of hygienically sound sensors on packaging or processing machinery also forms a fundamental component of guidelines published by the European Hygienic Engineering and Design Group (EHEDG). When hunting for hygienically sound and simple sensor installation, the company found what they needed to mount the sensor in a safe way at LAPP.

The secret of the SKINTOP® cable gland’s ability to prevent twisting effectively is in its special construction, the geometry of the individual parts and the selection of materials for the latter. Although conventional cable glands also contain an elastomer seal, attention is already paid during the development phase at LAPP to fix and seal all materials installed for cables, conduits and pipes as effectively as possible.

The elastomer seal for the cable on the SKINTOP® HYGIENIC is longer: when the nut is tightened, a certain volume is additionally displaced along the inside of the domed cap nut. This results in a higher retention force prevents twisting and reliably fills potential dead spaces between the elastomer sealing ring and stainless-steel tube or cable. LAPP’s engineers came up with an ingenious design to ensure that this worked. The SKINTOP® typically conceals a plastic basket with flexible ribs beneath the domed cap nut. Internally, the domed cap nut is tapered to the optimum degree of efficiency and presses these ribs downwards and inwards when screwed down, where they press against the sealing ring. Doing so guarantees controlled material displacement, high retention forces, and prevents the cable and/or sensor from being pulled out. The stainless-steel base features small indentations, into which the corresponding pins of the ribbed basket engage to ensure that the smooth plastic of the basket doesn’t become twisted in the stainless-steel housing. As a result, neither the basket nor the cable or sensor twist: they all remain stable.

The cable gland’s seals are not only intended to prevent twisting, but also to protect and guide the electrical connection cable out of the equipment and prevent liquids from entering. SKINTOP® HYGIENIC cannot be infiltrated by water and particles, in compliance with IP69. This is tested in the LAPP Group’s laboratory by spraying the products at high pressure. SKINTOP® HYGIENIC also passes IP68, the criteria of which require the cable and gland to be immersed in water and subjected to a pressure of 10 bar, which corresponds to a depth of 100 metres. Alongside the internal seal, the SKINTOP® HYGIENIC features two additional seals for this requirement: one where the cable gland meets the housing and another underneath the domed cap nut. The seal which is in contact with the housing takes the form of a flat seal in accordance with hygienic design principles, and not that of an O-ring, which would usually be fitted on or in one section of the housing. After all, food residue could accumulate in this indentation that might not even be removed when using a pressure washer.

The cable gland doesn’t leave itself vulnerable to bombardment by dirt and germs anywhere else either. The sliding seal beneath the domed cap nut reliably seals potential dead spaces. Instead of a hexagonal shape, the design only features two flattened sides for a wrench to engage with on the neck and domed cap nut respectively. This allows the sensor to be fixed in place with great ease.

Development is still ongoing. LAPP presented as well an EMC variant: the SKINTOP® HYGIENIC SC. This model contains a spring made of beryllium copper which acts as a barrier against electromagnetic fields. It is the first electromagnetically compatible cable gland manufactured in compliance with hygienic design specifications.