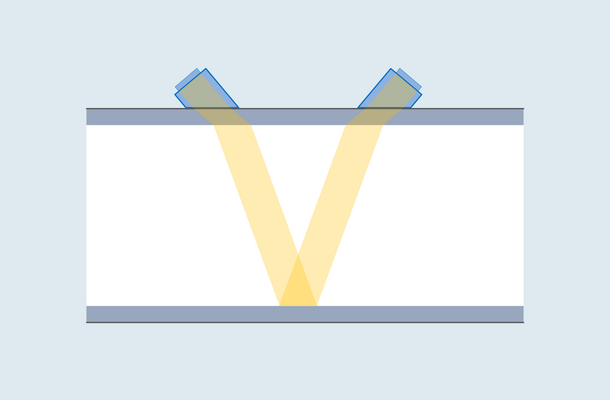 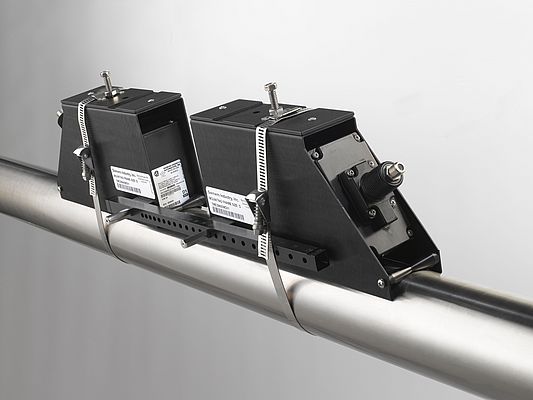 Clamp-on ultrasonic flowmeters are a cost-efficient, low-maintenance way to measure volumetric flow through a pipe. These benefits stem primarily from the external sensors that characterize clamp-on technology. Unlike traditional insertion sensors, their clamp-on counterparts do not require any pipe alterations or process downtime for installation; instead, the sensors are mounted on the exterior of the pipe and measure flow by transmitting acoustic signals through the pipe wall and into the fluid. Despite never making contact with the medium, clamp-on sensors can demonstrate very high levels of accuracy and repeatability on par with or better than other flow measurement technologies. The key to achieving optimal performance is properly matching the sensors to the pipe being measured. As clamp-on technology can operate on pipes of varying diameters, materials and wall thicknesses, it is important for suppliers to offer a suitably broad selection of sensors with differing frequencies. This will help users to achieve the best possible match between the sensors and the resonant frequency of the pipe wall, resulting in more accurate flow measurement.

Clamp-on ultrasonic flowmeters can be equipped with two different types of sensors – shear mode or Lamb-wave (also known as wide beam). Shear-mode sensors inject an acoustic signal into the pipe wall, effectively forcing the signal through the pipe and into the opposing sensor (Figure 1). Shear mode performs reasonably well within a limited range of process conditions. However, although easier and less costly to employ than Lamb-wave sensors, shear-mode sensors are sensitive to suspended solids and bubbles exceeding a few percent by volume – which can lead to poor performance or even complete loss of the receive signal. These sensors are best suited for flow surveys or check metering applications that require a portable flowmeter kit with limited capacity. For the majority of dedicated metering applications, Lamb-wave sensors ensure better performance over a wider array of fluid conditions. They are designed primarily for steel pipes and are the preferred choice for hydrocarbon and gas applications. Each Lamb-wave sensor has a designated range of frequencies suitable for specific pipe wall thicknesses. The sensors broadcast frequencies within their available range through the pipe to identify the frequency most closely matching that of the pipe wall, which is determined by the quality and amplitude of the receive signal. The selected frequency is transmitted into the flowing media with the pipe wall acting as a waveguide (Figure 2). This method requires a wider range of available sensors due to its dependency on the resonant frequency of the pipe wall, but the benefits are substantial. Lamb-wave sensors employ a lower transmit voltage and produce a stronger, less dispersive signal covering a large axial area of the pipe’s inside diameter. The result is a notably higher signal amplitude than for shear mode. The wider beam also offers formidable resistance against suspended solids and bubbles that might otherwise disturb the beam and cause signal loss.

By making a wide range of Lamb-wave sensor frequencies available, suppliers can help users attain the strongest possible signal and highest levels of accuracy. This is supported by well-established scientific principles related to Lamb or plate wave behavior.

Lamb-waves represent a complex form of acoustic wave propagation in a plate, in which the wave velocity depends on the relationship between the plate thickness and wavelength. Lamb-wave sensors are designed to excite a specific mode of Lamb-wave within a bounded pipe wall. This mode, a zero-order anti-symmetric flexural mode Lamb-wave, exists over the entire range of frequencies – from zero to infinitely high – and is characterized by particle displacement primarily perpendicular to the surface. The guided wave approach of Lamb-wave sensors is very different from shear-mode sensors, where the propagation velocity depends solely on the properties of the pipe material and not on the pipe wall thickness or the sensor frequency.

A pipe wall tends to oscillate with greater amplitude when it is driven at one of its resonant frequencies. Many of these modes of resonance can occur inside a single pipe, representing multiples of the fundamental frequency known as harmonics. However, the strongest and most easily excited is the zero-order anti-symmetric mode. Lamb-wave propagation, phase velocity and signal attenuation in the bounded pipe wall are described by associated dispersion curves. These represent the various sinusoidal or sine wave solutions to the wave equation, where the boundary conditions are defined by the free pipe wall or plate surfaces.

A Rayleigh-wave is a type of surface acoustic wave that propagates along a single surface of a very thick plate. A Lamb-wave will behave like, and approach the velocity of, a Rayleigh-wave when its wavelength becomes much smaller than the plate thickness. Rayleigh-waves cannot inject acoustic energy into the fluid because this type of wave propagation limits particle displacement to the outer surface of the pipe wall.

For this reason, utilizing a Lamb-wave sensor with the incorrect frequency for a given pipe – i.e., a pipe with a wall thickness much greater than one wavelength – will significantly reduce the fluid signal amplitude while enlarging the amplitude of the undesirable pipe wall signal. Operating a Lamb-wave sensor too far from the ideal pipe wall frequency also increases the flow error. This is due mainly to the fixed phase velocity of the sensor, which is defined by its wedge angle and sound speed.

Siemens is one example of a clamp-on ultrasonic flowmeter supplier that fully supports the correlation between offering multiple Lamb-wave sensor frequencies and attaining optimal flow measurement results. The Sitrans FSS200 WideBeam sensor line is available with a total of 12 different clamp-on Lamb-wave sensors – a larger portfolio than any other manufacturer. These sensors, which vary both in physical size and frequency range, are suitable for pipe wall thicknesses from 0.64 to 31.8 mm (0.025 to 1.25 in). A supplementary series of 12 high-temperature sensors covers the same scope of frequencies but withstands higher process temperatures up to 121 °C (250 °F). To eliminate the possibility of choosing incorrect sensors, Siemens publishes comprehensive selection guidelines and provides worldwide customer support staffed by experts in clamp-on ultrasonic flow. All sensor models can be connected to one of two digital transmitters to create a complete flow system – the advanced Sitrans FS230 or the basic Sitrans FS220.

When to use Lamb-wave sensors

There are several limitations that should be considered before selecting Lamb-wave sensors over the more common shear-wave sensors:

Achema 2018
remote data manager monitors instrumentation anytime, anywwhere via the web - ready to go out of the box
Read more