The PAC is Parker’s all-in-one machine controls solution that combines PLC, HMI, and motion control functionality into a single device 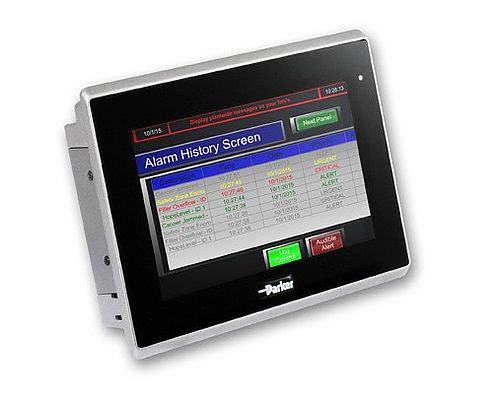 The Electromechanical and Drives Division of Parker Hannifin, the global leader in motion and control technologies, has announced the release of the PAC Terminal (PT). The PT is a thin client Human Machine Interface (HMI) developed to work seamlessly with the Parker Automation Controller (PAC). With the PAC handling the control and HMI logic, the PT is responsible for displaying the embedded HMI as well as sending touch screen inputs from the user back to the PAC. As a thin client, the PT significantly reduces the overall system costs when compared to a traditional HMI

Parker has chosen to standardise on the IEC 61131-3 programming language and PLCOpen motion control function blocks. This choice provides machine builders with the ability to use traditional ladder diagram (LD), but also to take advantage of the latest control languages available such as structured text (ST), Continuous Function Chart (CFC) and Sequential Function Chart (SFC). IEC 61131-3 brings object oriented-like programming capabilities to the automation industry with the ability to create custom function blocks, libraries, and various data types. This empowers OEMs to create modular code that can be re-used, which significantly reduces the overall time to develop machines.

Like traditional HMIs, WebVisu allows programmers to develop their HMI using easy drag-and-drop tools such as buttons, sliders, and pre-made alarm and recipe objects. However, WebVisu takes it to the next level, allowing developers to create libraries of visualisation objects – or use some of Parker’s pre-made objects – to significantly reduce the time required to build common HMI functionality. Users can also use either pre-made themes or create their own to provide a visual motif throughout a project or multiple projects.