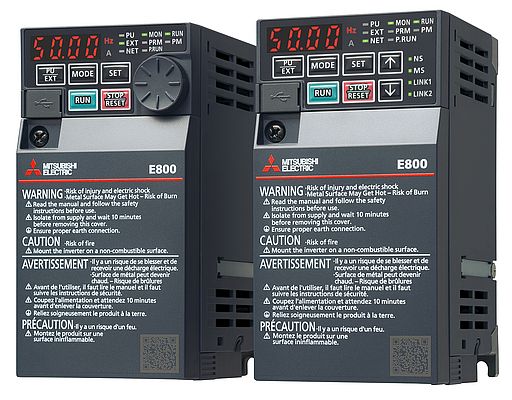 A highly flexible, compact inverter series with multiple built-in networks, including TSN (Time Sensitive Networking), has been released by Mitsubishi Electric to support the needs of smart factories. Industries including machine building and automotive, as well as food & beverage, life sciences and water treatment will benefit from the control capabilities.

To maintain safety and productivity, the inverter achieves SIL2 Pld and 3 PLe. Safety functionality is featured as standard without the need for an encoder and includes Safe Torque Off (STO), Safe Stop 1 (SS1), Safe Brake Control (SBC) and Safe Speed Monitor (SSM).

Enhanced, customised control is provided by the built-in PLC functionality which is configured via the FR-Configurator2 software. Multiple inverters can be controlled by a single master, removing the cost of an external PLC. The FR E800's autotune can be used for Surface Permanent Magnet (SPM), Interior Permanent Magnet (IPM) and in future, synchronous reluctance motors and offering maximum flexibility by reducing spares stock holding. Control modes including closed loop vector control (with encoder), real sensorless vector control (without encoder) and positioning without sensors are supported.

About Mitsubishi Electric: With 90 years of experience in providing reliable, high-quality products to both corporate clients and general consumers all over the world, Mitsubishi Electric Corporation is a recognized world leader in the manufacture, marketing and sales of electrical and electronic equipment used in information processing and communications, space development and satellite communications, consumer electronics, industrial technology, as well as in products for the energy sector, water and waste water, transportation and building equipment.

Optimizing Water Systems with a Software

Getting Started for the Future of Water Industry

Automation & Communication, Maintenance
When trying to identify and implement trends in water supply, it’s important to take into account topics such as system migration and modernization, data capture and analysis or preventive maintenance
Read more

Solution for the Water Industry

Automation & Communication, Maintenance
Mitsubishi's iQ Works can help with the realization of challenging projects, containing all the functions required for each phase of the system to be developed
Read more

Solution for the Water Industry

Automation & Communication, Maintenance
Mitsubishi's iQ Works can help with the realization of challenging projects, containing all the functions required for each phase of the system to be developed
Read more

The process industry in 2020