Displaying of limits for user-friendly and intuitive operation 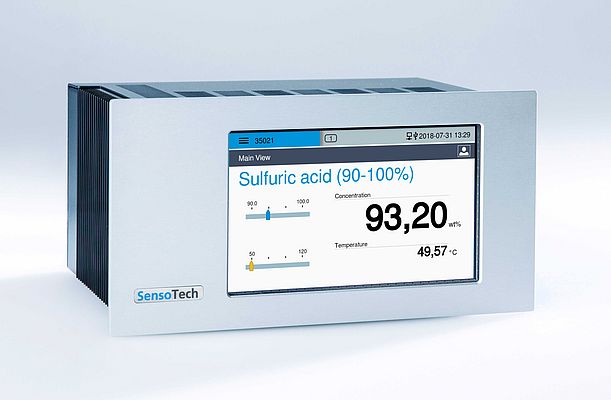 For concentration and density measurement in process liquids by sonic velocity, LiquiSonic systems are successfully used worldwide since more than 25 years. With the limit value displaying SensoTech continues optimizing the controller of the LiquiSonic product line.

In addition to the numeric concentration, density and temperature displaying, the visualizing of limit value ranges is available from now on. That simplifies the monitoring of an approximation to critical values. Users can identify the segment in the measuring range where the current value is settled on and get an overview quickly. When approximating the borders of the measuring range, the arrow turns into yellow signaling a warning. A range excess is shown by a red arrow. The LiquiSonic controller display allows up to three value ranges at the same time. This applies for each one of the up to four sensors, which can be connected to a control unit. Another benefit is the customizability of the measuring ranges. By using the intuitive menu, every critical value can be adjusted separately.

Of course, an automatic reaction of the LiquiSonic system to the approximation or excess of the limit values to the process control system, i.e. via Profibus, is possible. This allows users to react to process changes completely automatic and in a matter of seconds what causes more safety and an optimal process control. Additionally, the digital outputs of the controller can be used to address optical warning signals in the production hall entirely automatic. The new limit value displaying does not influence any of the other functions of the controller. It is a very useful supplement, makes the system more intuitive and creates added value in the process.

Measurement & Instrumentation
While the wheels of industry need to keep turning to produce the everyday items that we take for granted, there is a growing realization that this cannot be done at the continuing expense of the environment.
Read more