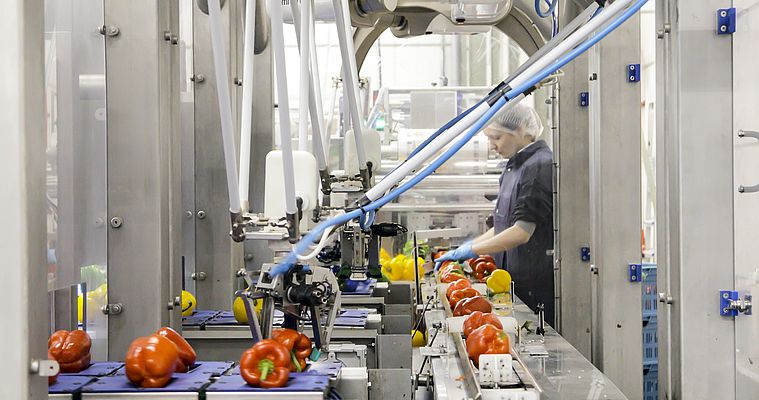 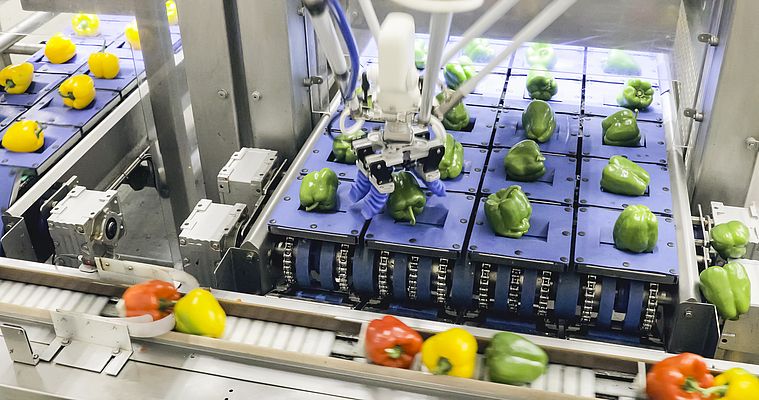 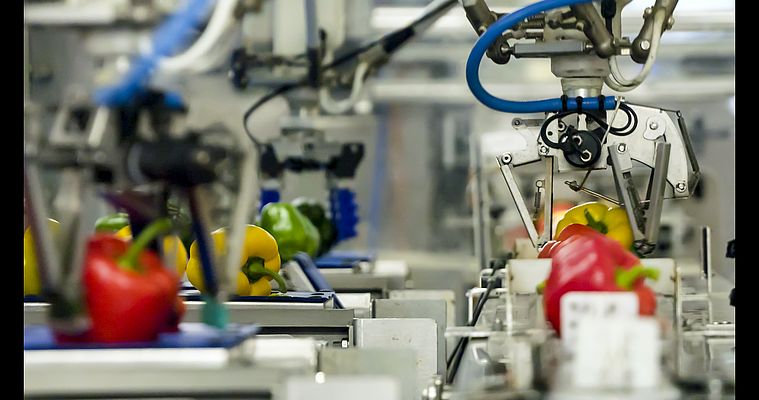 Combilo - a leading fruit and vegetables wholesaler in the Netherlands, recently installed a new robot-assisted packaging line and, overnight, increased productivity by 30%. The new packaging line includes delta robots and vision system from Omron and was built by the systems integrator EasyPack Technologies.

Combilo specializes in the import, export, packing, storage, shipment, and distribution of fresh fruit and vegetables to retailers. One of the products it packages is the bell pepper “traffic light”, this is a packet containing one red, one yellow and one green bell pepper. Not surprisingly, this used to be slow and labour-intensive, but with the new robot-assisted packaging line Combilo can perform the traffic light packaging much more efficiently and with significantly fewer failures.

The Combilo packaging hall houses five lines that make millions of packages every year. “A conventional line for the traffic light peppers used to be staffed by seven people,” explains Production Manager Marcel Villerius. “One person would fill the trays with bell peppers of each colour. Three employees would then place the bell peppers by hand on the belt in the correct colour order by hand. The bell peppers were then sent through a flow packer in sets of three, where they were packaged in film. An operator would stands by the packaging machine to check the supply to the machine and remove any failures. Once the bell peppers were packaged, the weight is checked and if a package, was too light, it was removed from the line. Two employees would stand at the end of the line to place the “traffic lights” in a crate before stacking them on pallets.”

“The automated line essentially does the same thing as a traditional line,” says Jeroen Bugter, Director of EasyPack Technologies, the company that developed the robot-assisted line. “An employee fills the trays with bell peppers of each colour, before three robots assume the role of the employees who place the bell peppers on the belt. The robots pick up the bell peppers and correctly position them on the belt in the correct colour order, before they are sent through the flow packer. The process following the packaging machine stage remains the same.”

Although the role of the robots may seem limited when viewed in isolation, the robots’ control mechanism is underpinned by an intelligent concept. “Picking up items by hand results in packages that are too heavy and contain too much product or packages that are too light and have to be rejected,” explains Villerius. “The starting point for the robots is a weight of 500 grams per package. The bell peppers are sorted and then delivered in weight classifications of 140–160, 160–180 and 180–220 grams. Load cells are integrated into the belts used to transport the bell peppers to the robots. The cells relay the weight of the individual bell peppers to the weight converter. When the first two robots pick up a bell pepper, they can choose between the two conveyor belts. When it comes to the last colour, there are four belts, so the robot has a greater choice to bring the total weight of the three bell peppers as close to 500 grams as possible.”

But that is not all. After the bell peppers are weighed, the vision system—comprising three cameras—relays the position, the location of the bell peppers and the shape of the stem to the system. This then allows the system to calculate precisely how the bell pepper should be packaged and turned so that it can be placed in the correct position on the belt. According to Villerius, working with bell peppers is especially difficult because their shape varies so much. And their stems are also rigid, so they have to face inwards to avoid ripping the packaging.

Two companies were involved in developing the automated packaging line. The contractor for the project was EasyPack Technologies; a young company that develops and builds packaging machines for the food industry EasyPack worked close with Rons Electronics Supplies, which is a regular partner that handled the electronics and controls. Virtually the entire control mechanism of the robot application—with the exception of the load cells and the weight converter—was supplied by Omron.

Jeroen Bugter from EasyPack Technologies explains which components were used for the installation: “We used three Omron R6Y Delta-3 robots. These are waterproof variants that can be cleaned thoroughly; this is important in the food industry, which sets high standards for hygiene. Each robot has four servo drives that control the three robotic arms and the rotation axis. Omron also supplied the FH-5010 vision system with three cameras and the controllers for the conveyor belts. Each robot has its own control box for the servo drives, and the central control box contains no fewer than 27 frequency controllers for the belts, as well as a NJ501 robotics controller. The latter processes the information about the weight, position and belt speed, thus steering the three delta robots. An encoder is installed on the flow packer to control the speed of the robots, ensuring that they run at exactly the same speed as the packaging machine. What is special about this is that all Omron components and controllers involved in the installation exchange data with each other via an EtherCAT network.”

Rons Electronics Supplies used the Sysmac Platform supplied by Omron to configure the installation. According to Director Ron Schinkel, this is an efficient and flexible way of programming how the machine is monitored and controlled. The robots and the packaging line are operated using a touchscreen that allows the operator to configure and control parameters such as weight, position, and belt speed through simple pictograms. The display also shows error messages.

“Rejected packages have to be unpacked manually and the bell peppers have to be returned to the start of the line. This is a timeconsuming process, and the extra handling is detrimental to the quality of the bell peppers,” explains Villerius. “The load cells and the weight converter control the robots so that the vast majority of packages now come out at the desired weight. The robots save us time, reduce the number of rejected packaged products, and use less packaging material.”

Villerius is happy with the new robot-assisted line. After a year of test runs and a few adjustments, the performance of the line is outstanding. The robots save on manpower, and the robot-assisted line provides a productivity that is 30% higher per FTE than a traditional line — a comforting fact in a time where it is becoming increasingly difficult to find personnel that are adequately suited to the job.

Automation & Communication, Maintenance
The new sensors are able to continuously monitor and report their own performance and support on-the-fly reconfiguration using data transferred by the automation system
Read more
View all supplier's articles
Advertise with us
Related articles

How Pharma 4.0 Will Benefit from Open Industrial Ethernet

Automation & Communication
Confirming the safety, efficacy and quality of medications is paramount in the pharmaceutical sector, which requires robust data governance strategies. In the world of Pharma 4.0, these need to accommodate an ever-increasing volume of data. Technologies that incorporate gigabit Ethernet and Time-Sensitive Networking (TSN) are exactly what is needed. Author: John Browett, General Manager at CLPA Europe
Read more