Around three years ago, EBRO ARMATUREN worked closely with its customers to develop a butterfly valve adapted specifically to the requirements of the chemicals industry. A prototype has already been deployed in the food and beverage sector, including at Schneider Weisse. Besides the FDA compliance required with regard to food and pharmaceutical technology, resistance to chemically aggressive media...

Around three years ago, EBRO ARMATUREN worked closely with its customers to develop a butterfly valve adapted specifically to the requirements of the chemicals industry. A prototype has already been deployed in the food and beverage sector, including at Schneider Weisse. Besides the FDA compliance required with regard to food and pharmaceutical technology, resistance to chemically aggressive media (such as detergents) has also been extremely important to the company during this process. The H0 butterfly valve has been continuously refined and optimised over its three years of use in ongoing operations at the “Weisses Brauhaus”, part of the Schneider Weisse brewery in Kelheim. On the back of extremely positive feedback received during this time from Schneider Weisse and other customers who have also been trialling the H0 butterfly valve, it is now entering series production.

The Schneider Weisse brewery is now in the hands of the sixth generation of the owner family and has been brewing its wheat beer for over 140 years using a technique that has hardly changed at all over this time. As well as using a strain of yeast that has been cultivated ever since the company was founded, this also includes in particular the traditional method of fermenting the wort in open containers rather than in sealed tanks. Schneider Weisse also shuns any filtration and heat treatment. All the components involved in the brewing process have to be as clean as possible to give the beer a twelve-month shelf life despite its traditional origins. To solve this conundrum, Schneider Weisse relies on cutting-edge, ultra-innovative technology, while preserving its traditional methods.

Valves are key components in the hygiene master plan

It became clear that microbial contamination from the brewhouse can be transported during the production process into the areas behind it, where cooling takes place, as deposits break off and come away. This means that micro-organisms can get into processes that take place a long way behind the brewhouse. In order to prevent this and guarantee lasting production reliability, identified weaknesses in the process are directly avoided and potential risks excluded as far as possible. Anton Ladenburger, Senior Sales Support at GEA, comments: “The H0 valve that EBRO developed has now been part of the hygiene master plan for three years and handles everything thrown at it with aplomb.”

To achieve the maximum possible degree of safety and quality, Schneider Weisse drew up its hygiene master plan as far back as 15 years ago and works continuously on improving it. This plan, which was developed in partnership with GEA and which, according to Master Brewer and Managing Director Hans-Peter Drexler, has valves as a key component, enabled the number of infected batches and thus the reject rate to be reduced to 0. The brewery has also enjoyed a hygiene status of 0 germs.

The new H0 butterfly valve was developed on the basis of the T 200 valve, which had proved its worth over decades. It is a PTFE-clad butterfly valve that is used in extremely demanding processes in the chemicals industry. The butterfly valve was fitted with flange connections used in the food and beverage industry in order to meet customer requirements. The benefit of these connections is that they centre the valve inside the pipe system and are accurate to the nearest tenth of a millimetre. Because the inside diameters of the valve and the pipe are identical, overhangs and recesses are avoided, allowing a fluid medium to flow out and the pipe system and valve to be cleaned, in each case without leaving any residue.

The H0 valve has a modular design. At the centre is the body, which is made from corrosion-resistant stainless steel (1.4408). The outer edges are designed so as to ensure gap-free sealing, ensuring that the valve can be cleaned easily and thoroughly from outside. The disc and shaft are cast from a single piece of duplex stainless steel (1.4469). This one-piece process enables a gap-free join between the disc and shaft and thus avoids any dead space, therefore reducing the risk of contamination even further. In addition, the high-gloss-polished duplex disc offers very good resistance to corrosion and has a non-adhesive, hygienic surface that is easy to clean. The valve liner is made from PTFE, which is FDA- and EG1935-approved and can thus be used safely in the food and pharmaceutical sectors. The material is also resistant to almost all chemical media and does not absorb any odorants, flavourings or colourings. The materials employed allow a wide range of cleaning agents to be applied, as is the case with CIP, for example. Steam up to 150°C can also be used without any problems.

The shaft sealing system comprises a spring assembly with a downstream pressure ring, which applies reliable, constant pressure to the liner. Unlike with a conventional disc sealing system, this guarantees particularly reliable and long-lasting sealing for the shaft feedthrough.

The flange at the top of the valve is designed in accordance with DIN EN ISO 5211 and can thus be attached directly to all standard types of actuator. Especially for areas of facilities with
stringent hygiene requirements, such as food applications, EBRO supplies a pneumatic actuator that has been designed specifically for this application and that boasts a particularly hygienic and space-saving geometry. This means that customers can get their hands on a compact, automated end-to-end solution for these facility areas too.

The unit comprising the valve and connecting flanges is a modular assembly, enabling, for instance, the transition from a welded pipe system to one with tri-clamp connections. Customers can choose from connectors in accordance with DIN 11853-2, DIN 32676 and DIN 11850/11866. The connecting flanges are likewise made of high-grade 1.4408.

Over the three years in which they have been trialled at Schneider Weisse, the H0 butterfly valves have undergone regular checks, including via endoscopy. The last of these checks revealed that the valves were still virtually as good as new. “Whereas the butterfly valves that were used previously had a service life of at most three years before they had to be replaced, due to the oils from the hops and abrasion from the husks, we expect our H0 butterfly valves to last at least six years,” explains Thorsten Hardt, the EBRO product manager in charge. As well as increasing availability on the brewing line, it also means lower maintenance costs. This has prompted Schneider Weisse to convert its entire brewhouse to EBRO’s H0 butterfly valves. 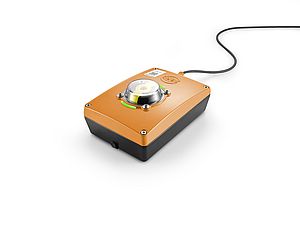 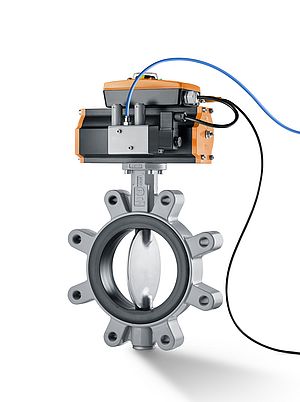