Moving loads: A family tradition since 1745 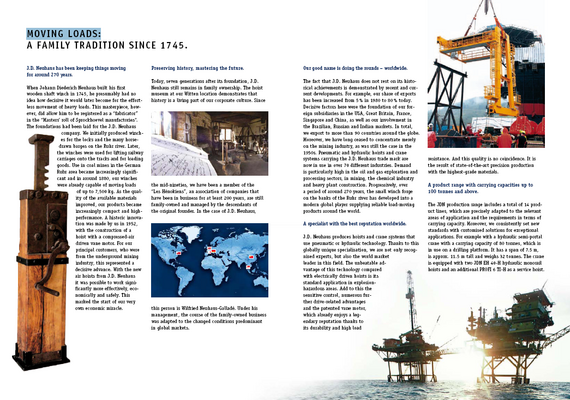 JD Neuhaus. When Johann Diederich Neuhaus built his first wooden shaft winch in 1745, he presumably had no idea how decisive it would later become for the effortless movement of heavy loads. This masterpiece, however, did allow him to be registered as a “fabricator” in the “Masters’ roll of Sprockhoevel manufactories“. The foundations had been laid for the J.D. Neuhaus company. We initially produced winches for the locks and the many horse drawn barges on the Ruhr river. Later, the winches were used for lifting railway carriages onto the tracks and for loading goods. Use in coal mines in the German Ruhr area became increasingly significant and in around 1880, our winches were already capable of moving loads of up to 7,500 kg. As the quality of the available materials improved, our products became increasingly compact and high performance.

Equipment & Services
The new Hydro Coating features a percentage of organic solvents that is less than 3%, which is significantly more environmentally-friendly than the former hammer finish
Read more

Equipment & Services, Maintenance
Manufactured under the mantra ‘engineered for extremes’, thousands of JDN pneumatic and hydraulic hoists and crane systems are in service worldwide in harsh environments
Read more

Equipment & Services, Maintenance, Explosion Protection & Safety
J D Neuhaus’ hoist was used to handle the lifting and temporary storage of a pump and pipework assembly from an approximate 20 metre lift from sea level to an upper storage area
Read more

Equipment & Services
The largest crane system constructed to date by J D Neuhaus has been delivered to Westcon Lofteteknikk AS (WCL) of Norway for use on an offshore drilling rig. The semi portal design comprises an A-frame supporting twin overhead horizontal track beams providing a 7.5 metre span.The crane has an approximate height of 11.5 metres with a total weight of 32 tonnes. It is equipped with JDN hydraulic EH 40-H...
Read more