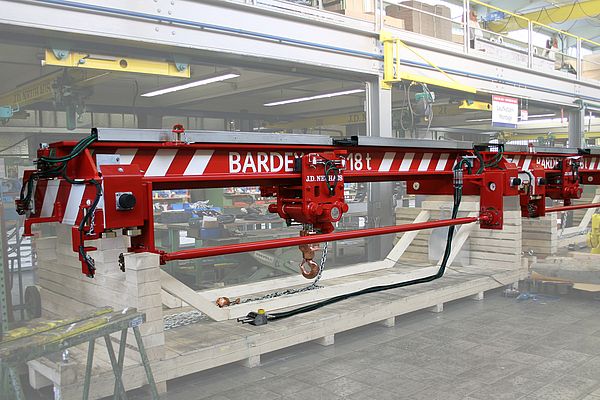 Hoists are an integral piece of equipment on FPSO’s, used to manoeuvre equipment both on and around the vessel. A hydraulic overhead crane hoist provides the material handling operations
in these heavy loads and harsh environment.

The FPSO vessel is used as a temporary storage unit for oil or gas from offshore production platforms before it is subsequently transported by a pipeline or oil tanker to the store depot. An integral piece of equipment on FPSO’s are the hoists used to manoeuvre equipment both on and around the vessel. Subject to heavy loads and harsh environments, the JDN hoists provide an essential ‘strongest link’ in these material handling operations.

Instead of procuring 16 separate chain jack tensioning systems (four per corner of the
FPSO and each rated at 18 tonnes), it was determined that one unit per corner could be used and a system of four overhead cranes used to move one chain jack tensioning system for use in all four corners of the FPSO. Additionally, the specially designed mooring system included sixteen fairlead stoppers each weighing in at almost 25 tonnes.

A system like this had never been built before, and JDN was the only crane builder in the world capable of supplying it to specification and on time. It comprised a hydraulically powered overhead crane with a hoist lift capacity of 18 tonnes, designed to withstand daily ocean environmental conditions with a high atmospheric moisture content.

The J D Neuhaus company have a long established reputation for the design and manufacture of materials handling products. They also supply purpose designed equipment for specialised applications such as the oil and gas industry where safety and reliability are primary requisites.

For this purpose they supplied hoists, with a lift capacity range from 0.25Kg up to 100 tonnes, to API7K certification. These are high durability products rated explosion proof/spark resistant and powered by compressed air or hydraulics with corrosion resistant options also available. Customised lifting and control systems can be accommodated with load test certifications available through DNV, ABS, Lloyds and others. Typical land based or offshore equipment loads include BOP handling, FPSO vessel mooring/tensioning together with a wide range of general materials handling requirements on jack-up rigs, semi-submersibles, drill ships etc. Specialised hoist applications have also been developed for operation in low temperature ‘cryogenic’ conditions, together with hoists for subsea operation down to levels of 70 metres.

Equipment & Services
The new Hydro Coating features a percentage of organic solvents that is less than 3%, which is significantly more environmentally-friendly than the former hammer finish
Read more

Equipment & Services, Maintenance
Manufactured under the mantra ‘engineered for extremes’, thousands of JDN pneumatic and hydraulic hoists and crane systems are in service worldwide in harsh environments
Read more

Equipment & Services, Maintenance, Explosion Protection & Safety
J D Neuhaus’ hoist was used to handle the lifting and temporary storage of a pump and pipework assembly from an approximate 20 metre lift from sea level to an upper storage area
Read more

Equipment & Services
The largest crane system constructed to date by J D Neuhaus has been delivered to Westcon Lofteteknikk AS (WCL) of Norway for use on an offshore drilling rig. The semi portal design comprises an A-frame supporting twin overhead horizontal track beams providing a 7.5 metre span.The crane has an approximate height of 11.5 metres with a total weight of 32 tonnes. It is equipped with JDN hydraulic EH 40-H...
Read more

Equipment & Services
If a packaging or processing line is no longer running at full capacity, a brief consultation with the general practitioner isn’t enough. What food and pharmaceutical producers need to keep their lines going at high output and product quality.
Read more

From Large to Small – Bag Handling Made Smart and Easy

Equipment & Services, Processing Machinery
Piab’s broad portfolio of lifting and moving solutions ensures that powders and granules provided or packaged in bags can be handled automatically. With piSMART options included direct measuring, documenting and controlling is possible for all bag sizes
Read more

Equipment & Services
Master Bond offers a variety of easy-to-handle one and two component adhesives, sealants and coatings formulated for the assembly of medical devices
Read more

Equipment & Services
Suitable for use in 4‐stroke engines, the new SENTRON LD 8000’s extended drain intervals allow to have up to 8,000 hours between drains
Read more
Request information