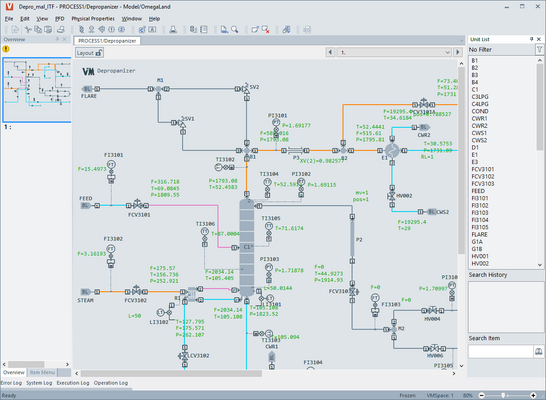 In the oil, natural gas, petrochemical, chemical, and other industries, the number of skilled operators continues to decline each year. As a result of the pressing need to train new operators, interest has grown in plant operator training systems. Omega Simulation’s OmegaLand integrated dynamic simulation environment enables the construction of virtual plant models that can be used not only for the training of plant operators but also for the study and verification of chemical processes and the design of new processes. Thanks to its ability to precisely reproduce plant operations based on the processes at actual plants, OmegaLand has won wide acclaim and has been a best seller around the world since its release in 2000.

OmegaLand consists of the Visual Modeler plant dynamic simulator and a variety of functional modules including a graphic module for the on-screen display of plant operations and a simulation control module. With the assistance of an engineer, these modules can be combined to construct a system that meets the needs of each user.

With this latest release, the user interface has been updated so that each of the functional modules can be operated using the same integrated environment, thereby improving engineering efficiency. To ease the process of system engineering, three separate functional module packages are available.

The user interface has been updated to allow users to operate different functional modules using the same integrated environment. Previously, engineers had to launch multiple functional modules before they could carry out a task; with this new version, tasks can all be easily executed on a single screen. This eliminates the need to input data for each functional module, thereby reducing the likelihood of human error and thus improving the quality of the simulation system. Operability has also been improved by standardising screen design based on Windows® 7 and Windows® 10.

Previously, when building and tuning a virtual plant model to reproduce the behavior of a plant, engineers had to wait for the simulation to complete before modifying the program. With the new version, the simulation can be paused at any time if a problem is encountered with the model; once the program is modified, the simulation can be continued. In addition, the graphics and instruction functions have been modified to improve operability.

Oil and gas, petrochemicals, chemicals, electric power, and water treatment, and other industries

Automation & Communication, Maintenance
The latest release 3.02 of the software program can be used on PCs and tablets running Microsoft Windows 10
Read more

Measurement & Instrumentation
Can reduce the cost and complexity of calibrating power meters and analysers with accuracies up to 0.15%
Read more

Measurement & Instrumentation
Can reduce the cost and complexity of calibrating power meters and analysers with accuracies up to 0.15%
Read more
Advertise with us
Related articles