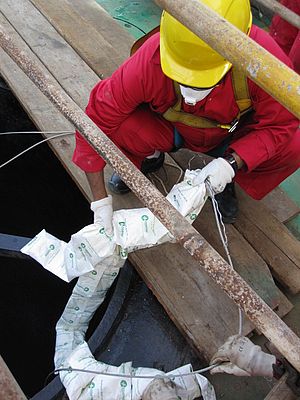 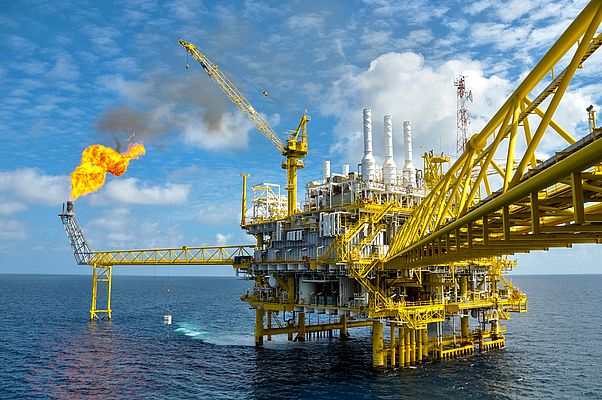 Abu Dhabi Marine Operating Company is a major producer of oil and gas from the offshore areas of Abu Dhabi in the United Arab Emirates. This large UAE oil company operates multiple barge-type offshore platforms constructed on caisson legs. Gas build-up inside the confined compartment around an offshore platform caisson leg led to an explosion. The gas was found to be hydrogen generated by the depleted anodes inside the caisson leg. An investigation of the fatal explosion made several recommendations, including removal of the anodes, biocide-treated water and blasting grit that had accumulated inside the caisson legs over two decades.

Internals of the platform caisson legs were left uncoated and filled with biocide-treated water and protected using suspended sacrificial anodes. Over time the anodes depleted and an alternative environmentally friendly method of protecting caisson legs was recommended.

A successful pilot study was conducted to evaluate the use of a Cortec's Vapor Phase Corrosion Inhibitors and the system was adopted for rectification of the problem. The final recommendation was corrosion management utilizing Vapor Phase Corrosion Inhibitor (VpCI®). To assess the effectiveness of this approach, a pilot project was launched in 2009 whereby one caisson leg was emptied and preserved with VpCI®. Carbon steel weight loss corrosion coupons were used to assess the effectiveness of this approach.

Unlike traditional contact corrosion inhibitors, VpCI® ’s have a moderately high vapor pressure that allows them to function in the vapor phase without applying VpCI® directly to the metal surface. Therefore, VpCI®’s provide protection in the liquid phase, vapor phase, and critical interphase. They access the most difficult to reach spaces and provide effective protection against crevice corrosion.

Within the preservation process, Cortec's ready-to-use waterborne corrosion inhibitor VpCI®-337 BD was used primarily for robust prevention of internal void spaces while simultaneously preventing bio-growth. The inhibitor was sprayed in the caisson legs to stop bio-growth.  After that water-soluble, biodegradable powder VpCI®-609 S was fogged in to the void space to counter dead volume of water at the bottom.  Custom manufactured strips of Cortec’s easy to use EcoPouch were then suspended from the top side for additional protection.  EcoPouches are filled with VpCI®-609 powder and constructed from breathable Tyvek®, which allows the

VpCI® molecules to be emitted through the membrane and form a molecular layer on metal surfaces providing corrosion protection.

The results showed strong improvement in the VpCI®- treated caisson leg where corrosion rates were maintained at low rates that were deemed acceptable. The methodology was adopted for the treatment of all other caisson legs at the complex. After two years, the pilot project was deemed a success and Cortec® VpCI® inhibitors were proven to effectively mitigate corrosion in an offshore environment by reducing the corrosion rate in the protected leg Vs the control by 584%.