for hazardous areas in oil or gas production 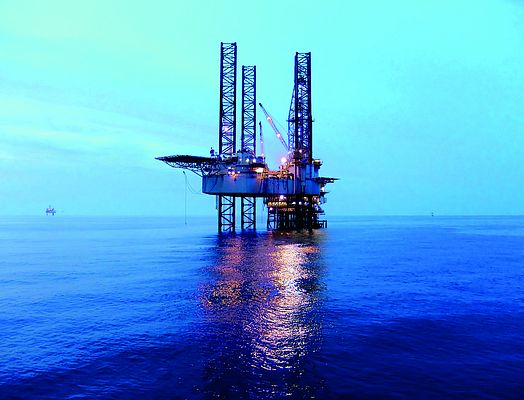 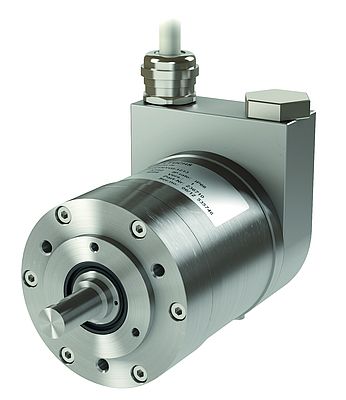 The increasing automation of conveyor systems in the oil and gas industry brings with it a rise in the number of sensors used for positioning moving system parts. Rotary encoders for hazardous areas from are flexible solutions for oil or gas production applications.

The drilling rigs and production platforms used in the oil and gas industry are some of the most extreme places to work in the world. The teams and equipment work hard around the clock and in all weather conditions. High mechanical forces, powerful vibrations, extreme temperatures, and dirt and moisture in salty, corrosive atmospheres present the toughest of challenges. The working conditions of the roustabouts or roughnecks, as the drillers are also known, and the rising demand in production call for increasing automation of systems. However, this, in turn, requires a growing number of sensors to reliably detect the rotational speeds, speeds, accelerations, paths, and positions of moving parts. As in almost all areas of automation technology, as well as machinery and plant engineering, rotary encoders are ideal for these tasks.

The unique environmental and working conditions of the onshore and offshore systems of the oil and gas industry pose a particular challenge when it comes to designing the rotary encoders. As well as exceptional mechanical loads and atmospheric influences, the hazardous area is subject to dangerous substances, such as flammable gases, vapors, or combinations of air and dust. The design must therefore be particularly robust, as well as explosion-protected. The 78-E Series rotary encoders for hazardous areas from Pepperl+Fuchs meet these requirements and have proven effective in various applications worldwide over a number of years.

Rotary encoders for hazardous areas are also found in the immediate vicinity of drilling rigs, for example in automated pipe handling systems where the drill pipes are routed and joined together. Rotary encoders on the central ring gear of the entire system and rotary encoders on the gripper arm, where they are connected to a cable pull, each provide precise position feedback. The so-called 'iron roughnecks' work in close correlation. This is equipment for screwing on with the aid of a power wrench, or, to be more exact, equipment for making up or breaking down pipes. The iron roughnecks break (release) or secure the drilling rods, relieving the roughnecks of one of the most dangerous and arduous manual tasks. Rotary encoders for hazardous areas are used to provide precise position data to the screwing units.

Designed for the offshore industry
The rotary encoders for hazardous areas demonstrate, in relation to housing versions, their ideal adaptation to the versatile applications in the oil and gas industry. The compact housing is only 78mm in diameter and is available in anodized aluminum, which many users in the offshore and chemical industry prefer over saltwater-proof aluminum, since it is significantly more resistant to aggressive media. Furthermore, users can install the rotary encoders in a V2A or V4A stainless steel housing.

Removable connection cover
The modular housing concept meets all the requirements of the "flameproof enclosure" (Ex d) type of protection. The removable cover makes it much easier to mount and commission the rotary encoders, as well as to carry out maintenance and service work on-site. The connection cover can either be supplied with a cable or just with the certified cable gland. The user therefore has the option to install individual wiring. Users are not forced to order preassembled devices and reorder should their needs change. Instead, they are able to install their chosen cables in the lengths required for mounting. Due to the separation of the encoder and cable, it is possible to replace individual components rather than the entire encoder or cable unit during servicing, such as in the event of a cable break.

According to users, one of the major advantages of the removable connection cover is that in fieldbus installations the IP-addresses and baud rates can be manually adjusted via the rotary switch inside the cover. Last but not least, connection covers are available for axial or radial connections, making it significantly easier to adapt the design to local conditions.

Explosive environments worldwide
As mentioned, explosion protection is a key requirement for oil or gas conveyor systems. The 78-E Series rotary encoders for hazardous areas from Pepperl+Fuchs deliver in this respect, too. The rotary encoders satisfy the ATEX requirements for gases corresponding to zones 1 and 2 (II 2G Ex d IIC T5 Gb) and the requirements for dust corresponding to zones 21 and 22 (II 2D Ex tb IIIC T100 °C Db IP6X). The stainless steel versions even satisfy the mining certification (I M2 Ex db I/IIC T5) applicable in the mining industry. The type of protection is equivalent to "flameproof enclosure" (Ex d), which includes an explosion inside the housing. This is due to the explosion-proof construction of the housing, together with the use of flameproof joints on all openings. In addition to the ATEX requirements, all variants of the 78-E Series satisfy the IEC and IECEx standards. This means that the rotary encoders can be used worldwide, including Asia and Brazil.

Measurement & Instrumentation
How can a feed silo or a glass recycling container be transformed into a smart asset? With the battery-operated WILSEN.sonic.level IoT sensor from Pepperl+Fuchs. The autonomous device is connected to the internet via LoRaWAN.
Read more
View all supplier's articles