Without Leaving a Trace 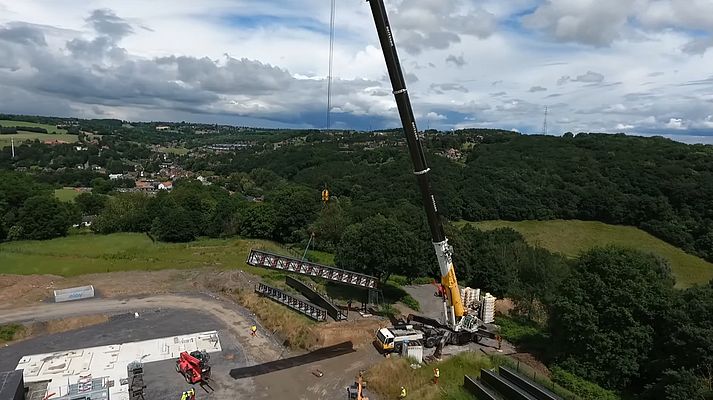 Demanding assembly work to get the conveyor operational 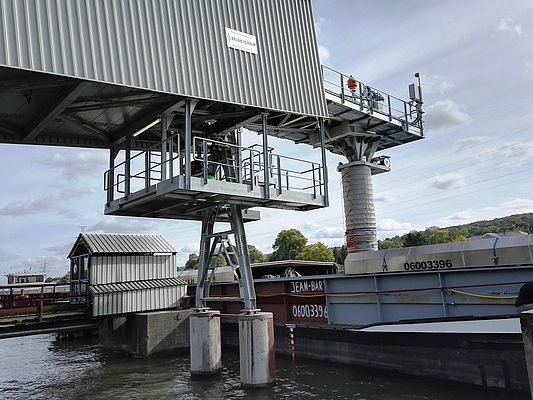 BEUMER Group installed a ship loader at the end of the conveyor line. It consists of a fixed boom with an extendable telescopic belt conveyor. Every day, 2,000 tons of fly ash are loaded on a ship 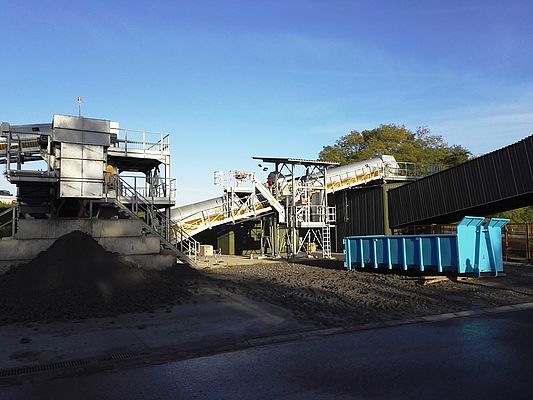 This is where the conveying begins. The material is transported from the stockpile onto the Pipe Conveyor

In the past, a coal-fired power plant was once in operation in the Belgian town of Flémalle. The coal residues are landfilled on a fly ash stockpile. Now, the stockpile is to be entirely emptied and the terrain transformed into a nature park. A BEUMER Group Pipe Conveyor is being used to transport the fly ash to the Maas river for shipment. The system has not only been adapted to operate along the steep mountains, but its enclosed design prevents the volatile material from coming into contact with the environment, while enabling a low-noise transport to the destination. This is important as the Pipe Conveyor passes over public motorways, railways and residential areas. This extraordinary project is characterised by the cooperation of the team with the customer Tractebel Engineering (Group ENGIE). The transport of the fly ash is carried out in strict compliance with safety standards, taking into consideration environmental protection and the effect noise pollution has on the local residents.

The neighbourhood around the Belgian town of Liège is calm and picturesque with small villages along the Maas. The forests and landscapes are partly untouched and present a unique fauna and flora. Industrialisation started very early in the region of Wallonia, as coal was available in abundance. Even though the mines were closed years ago, there are still residues of slates and stones or bottom ash. For example in Flémalle, less than 20 km away from Liège: for approximately 50 years there are about two million cubic metres of the mentioned materials in a fly ash stockpile within proximity of the once largest coal-fired power plant. The stockpile is indeed surrounded by a wall, but according to a study, in the long run, it will represent a major threat for the local residents as it is displaced every year by several millimetres. In addition, the fly ash is an important additive in the manufacture of cement and concrete. It must be prepared to remove foreign substances such as wood or metal and to limit the grain size to 70 millimetres for the cement industry. In a project that is the only one of its kind in Europe, the Belgian power supplier Elektrabel commissioned its subsidiary Tractebel Engineering (ENGIE) to dimension and install a processing plant. The company offers engineering and consulting solutions for the energy and nuclear energy sector as well as for industry and infrastructure. It is planned to dissipate the complete stockpile in the next ten years, and to transform the terrain into a nature park, which will be developed according to the wishes of the local residents and authorities.

Until then, the bulk material has to be transported to the Maas that is approx. two kilometres away (bee-line). However the terrain is very mountainous. The use of trucks would imply driving on public roads for long distances. This would have caused detours, slowed down transport times and raised costs. In addition, the environment would be harmed by exhaust gases, dust and noise. The project lead opted for the BEUMER Group Pipe Conveyor as economical alternative.

“To be able to support companies like Tractebel Engineering with turnkey solutions, we have bundled our comprehensive expertise worldwide spanning various industries and established different Centres of Competence”, says Vincent Ferlay, Managing Director BEUMER Group France. “It includes also our Pipe Conveyor. This international team bundles the know-how and supports the Sales Department and the Project Management. With Tractebel ENGIE we have developed a solution adapted to the special routing and the ambient conditions”, explains Ferlay.

The system supplier provided a conveying system with a centre distance of 1,800 meters. “Due to the system design and the required system capacity, we have designed the Pipe Conveyor with a diameter of 260 mm,” explains Ferlay. The conveyor transports 300 tons of fly ash per hour at a speed of 2.3 meters per second. Most importantly though: the enclosed transport of this machine protects the environment from the dry and dusty material. This was an important requirement for the construction of this solution to be approved in the first place. “The project planning absolutely had to guarantee a safe transportation of the material,” reports Ferlay. “The fly ash had to be prevented from exiting or falling on the ground, even in the smallest quantities”, since the route passes public motorways, railways and residential areas. The noise emission played an important role too. “We had to minimise the noise to an extremely low level,” he describes. The team developed special sound-absorbing elements that were also used to enclose the Pipe Conveyor bridges. “Along certain line sections, the noise level had to be kept under 35 dB(A),” says Ferlay. This is also possible with special sound insulation, idlers and low-noise bearings.

The Pipe Conveyor transports fly ash across the open environment, navigates large inclines reliably and can be designed to accommodate tight curve radii. This is why only a few transfer towers are required, depending on the length of the conveyor, the terrain conditions and the curves. BEUMER Group can customise the conveying system to match the individual routing, thus protecting the environment and reducing the costs. The system supports are up to ten meters high. Durable conveyor belts guaranteeing tensile strength are used. BEUMER Group makes use of own dimensioning programs to determine the ideal belt design, thus enabling to analyse tractive forces but also forces which occur due to acceleration and deceleration – always taking into account the net weight of the belt and the transported material. This method also lets you calculate possible curve radii. ”This is particularly important for ascending and descending conveyors,” describes Ferlay. For these types of projects, BEUMER Group also offers feasibility studies and profitability calculations. The colour scheme was selected so that the system blends in well with the environment.

The system supplier provided the turnkey system and all of the necessary components such as filters, strippers and dedusting units. The system provider also provided the engineering, automation and the steel structure, as well as loading systems: excavators load the material into hoppers and on vibrating feeders. From there it is transported to the feeding area of the Pipe Conveyor. BEUMER Group installed a ship loader at the end of the conveyor line. It consists of a fixed boom with an extendable telescopic belt conveyor. This way the ships are loaded efficiently. The ship loader is also equipped with a dedusting unit which keeps the process emission-free. Every day, 2,000 tons of fly ash are loaded on a ship and from there transported to a cement plant.

Equipment & Services, Processing Machinery
30 years of tradition in chemical and pharmaceutical solids handling allow CO.RA. to guarantee its products based on strict norms. Design and development and manufacturing of products are based in Italy and a qualified service team supports customers worldwide, on-site and remotely.
Read more