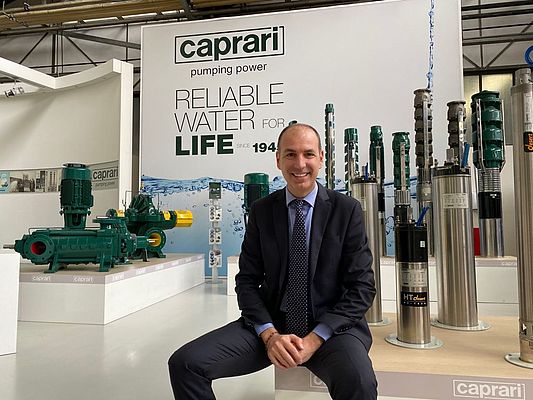 An Engineer in the pump sector for over 20 years, Vanni Vignoli has held various positions with Italian pump manufacturer, Caprari, best known for its centrifugal pumps, submersible motors, and integrated solutions for water systems. Most recently as its Head of Corporate Marketing, he has been responsible for both strategic and product marketing activities, whilst coordinating several businesses within the Caprari suite of companies. However, as of 1st June 2021 he will hold the position of Research and Development Director.

Currently Chairman of the Marketing Commission and Second Vice-President of Assopompe, Europump’s Italian association member, he has served Europump for many years. Initially as a Guest to various meetings and then as a Delegate, he became Chairman of the SME Commission, and a Member of the Executive Council before his election as First Vice-President in 2019, at the General Assembly held in Naples.

Vanni Vignoli succeeds Dr Sönke Brodersen, Global Executive Officer Committees and Associations at KSB SE & Co. KGaA and Chairman of VDMA Pumps+Systems, the German pump manufacturer association.  Sönke has been a member of Europump’s Executive Council since 2005 and served as the association’s President between 2011 and 2013, being re-elected in 2019.

Vanni Vignoli said of his election: “I very much look forward to continuing the work started by Sönke, notably with the setting-up of our new “digital working group” to address data, artificial intelligence and cyber security issues as they affect our industry, and the continuous promotion of our “Extended Product Approach”, which places us at the forefront of the EU’s sustainability policy”.

On behalf of all those involved in the European pump sector, the Executive Committee would like to offer its sincere thanks to Dr Sönke Brodersen for his fine and diligent work throughout his tenure as Europump President and wish Vanni Vignoli its unwavering support and best wishes as he takes over the role.

As part of the same election process, Luboš Michlik, Sales Director of Sigma Group and representative of CPMA (the Czech Pump manufacturers association) was elevated to the position of First Vice-President, having previously held the role of Second Vice-President for the past two years.  Additionally, Alexandre Lacour, President of SOMEFLU and representative of EVOLIS (the French pump manufacturers association), was elected to succeed Luboš as Second Vice-President.