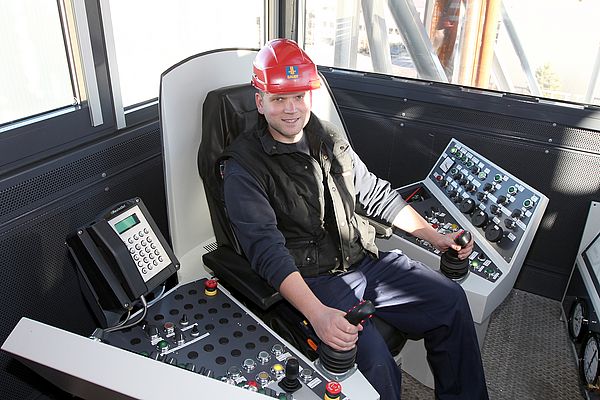 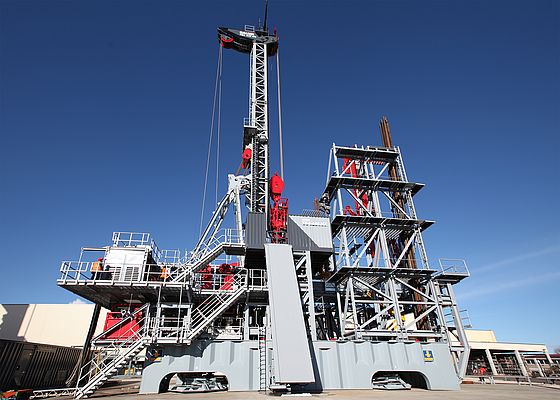 Every inch in the operator's cabins of deep drilling systems is precious. In contrast to conventional control units, where large flameproof enclosures are a must, the explosion-proof remote I/O system ANTARES is considerably more compact.

A touch of the Texas oil industry is in the air above Schrobenhausen, Germany. The Bauer Group entered the deep drilling rig business for oil, gas and geothermal energy in 2007. The international construction and machinery manufacturing conglomerate has over 110 subsidiaries and employs a staff of more than 10,000 people in about 70 countries, generating sales of 1.45 billion euros in 2012.

"Anyone investing this kind of money will not make a purchase sight unseen. The customer wants to see that the rig works. You can't sell this kind of equipment solely on paper," Schirmel adds. And so the Bavarians set up their latest model, the TBA 440 M2, on their premises in Edelshausen for demo purposes over a 1000-meter borehole.

Franz X. Both, Project Manager at Bauer Deep Drilling, explains what is key in this industry: "This demo allows us to simulate the installation and removal, referred to as drip-in / drip-out, and show the customers that the automatic pipe handler is able to smoothly install and remove the rods at high speeds - up to 550 metres per hour."  Naturally, the mantra that time is money applies here as well. When drilling to depths of as much as 5,000 metres , installation takes accordingly long. The faster the installation and removal can be accomplished, the better. The rigs cost a lot of money to operate every day. Being able to save customers time is a powerful selling point. Another benefit is that the casings are part of Bauer Deep Drilling's rigs. "The automatic rod handling feature is drawing attention in the market. Many were perhaps surprised that the pipe handling works so well. A lot of customers liked the fact that the entire rig, including the pipes, is able to "walk," comments Both. It's a feature that is almost reminiscent of a science fiction movie: using four large hydraulic feet, the equipment weighing approximately 1,000 tons can cover up to 30 meters  an hour in 75-cm steps.

The high level of automation allows the company to improve safety and save staff. Fewer employees in hazardous areas also mean a lower risk of injuries. This is an important factor, as the entire rig comes to a halt when someone is injured. It may take half a day, or an entire day, until all the whys and hows have been established. And a shutdown can easily amount to 25,000 euros a day.

1:0 for ANTARES
Until recently, the cabins for operating the rig were purchased from the competition, ready-to-install. "We decided that we would make them ourselves in the future. Of course, we could have produced them exactly the same," Schirmel states. In the predecessors, a standard control unit was installed in a flameproof enclosure. The drawback of this is that, when the cover has to be opened in the event of a malfunction, explosion protection is no longer ensured and the rig must be completely shut down. In contrast, the ANTARES system certified according to the latest ATEX and IECEx directives can be installed directly in the Ex area in zones 1 + 2 or zones 21 + 22.

Due to its large power reserves, the system offers efficient and compact I/O configurations. Up to 32 multi-channel modules can be supplied via a single rail control unit (RCU), resulting in a very high number of input/output channels. The RCU is the central unit of the system, featuring host communication, Ethernet switch, power management and I/O data management. An SD memory card provides additional back-up of the configuration data.

Bauer Deep Drilling previously tested various providers for Ex-protected remote I/Os. "Ultimately, the deciding factors were that ANTARES offers the advantage of trouble-shooting in explosive atmospheres, it can be installed without the need for a large enclosure and is compact. We have very little room, and the compact design makes it easier for us to accommodate the system in the control stand. And you don't need an additional, large flameproof control cabinet," Schirmel emphasizes.

In the new cabin, the remote I/O is integrated directly into the pedestal of the rig operator's chair - a very space-saving solution. The chair can be produced entirely by the assembly team in the workshop and subjected to thorough testing. Two joysticks, and in particular switches and operating elements, are connected to ANTARES, allowing the entire rig to be comfortably controlled from a seated position. All that is required is to connect the bus line and power supply, and the system is ready to go. Because it supports a large number of open communication standards ranging from fully redundant PROFIBUS-DPs to Ethernet standards such as PROFINET, MODBUS TCP and Ethernet/IP, convenient integration is assured. Furthermore, standard bus systems can be coupled directly to ANTARES, making additional explosion-proof components such as isolating amplifiers superfluous.

For Bauer Deep Drilling to be able to use a standard joystick in hazardous atmospheres, Ex specialists had to overcome one more challenge. An option had to be created to read the signals from potentiometers via ANTARES as well. The solution: a temperature module, which originally had a response time of 5 seconds, was modified to respond significantly more quickly. The extremely ambitious specification for the new response time read 50 milliseconds. "The maximum speed for the up and down movements of the top drive is 1 meter per second. If 5 seconds pass until the stop message arrives, we penetrate at the top or the bottom," the Project Manager illustrates the problem, which BARTEC solved with flying colours and a crafty approach.

Great freedom
Another argument that is clearly in favour of the BARTEC system is its flexibility. "Changes and individual requests will always be there, regardless of the reason," Schirmel says. "This is where flexibility is needed. If necessary, modules can easily be added or exchanged." ANTARES offers one advantage in this regard, where no other remote I/O system for the Ex area can keep up: flexible system approval. Until now, no company has managed to avoid having to clearly plan its remote I/O system and install it into certified Ex e enclosures with rigid approval. Users in particular had to undergo time-consuming and costly re-certification of the entire system any time a modification was made, regardless how minor. With ANTARES, however, it suffices to replace the system label if the temperature should change as a result of higher power. Effective immediately, electrical planning engineers are able to freely design their system, modify and expand it as needed, and install it into a simple, mechanically protected, standard industrial enclosure.

Measurement & Instrumentation
The redesigned Distillation Process Analyzer DPA-4 from Bartec is an ASTM D86 compliant process analyzer used for the validation and approval cycle with protofuel in modern refineries. This makes it ideal for applications in hazardous areas
Read more

How to cool analysers

How to cool analysers