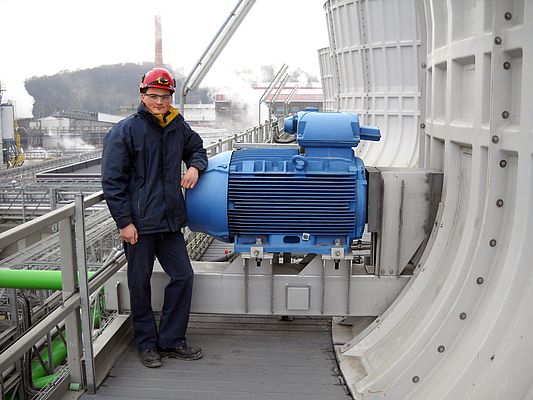 High efficiency motors are - appropriately - engaged in a green process for the production of sustainable bio-fuels. The motors have been supplied to BioWanze in Belgium, where they are used in a mill that processes wheat and beet syrup. BioWanze is the result of an investment of more than €250-million; it is owned by CropEnergies, a subsidiary of the Südzucker Group, and one of the main European producers of ethanol. The innovative BioWanze production process uses wheat syrup as fuel for the biomass boiler. This reduces the emission of carbon dioxide by 70% when compared to fossil fuels. The biomass boiler is 35 metres high, 60 metres long and 20 metres wide, and is capable of producing 100 tons/hour of steam at 93bar and 520ºC. Ethanol is an organo-oxygen compound of the chemical formula C2H5OH. It is used as a fuel for cars in two versions: hydrous ethanol (in cars run on alcohol or flex fuel models) and anhydrous ethanol (added to petrol at a 25% proportion). The first has 7% water in the blend whilst the latter has a maximum of 0.7%. BioWanze is the first project to produce “new generation” bio-ethanol in Europe. Begun in 2009, the plant, at Wanze in Belgium, is capable of producing 758m3 of ethanol per day. Bio-ethanol is produced from agricultural feedstock – in this case, wheat and beet syrup. The process is highly efficient, - the centerpiece being a biomass boiler with enhanced thermal efficiency - with each element of the process optimised to ensure an overall minimal impact on the environment. With this innovative system, BioWanze intends eventually to provide half the amount of the bio-fuel consumed in Belgium. The requirement for maximised efficiency across the process has resulted in the use of W22 high efficiency motors at the BioWanze facility. The motors are installed on the cooling tower of the mill at the plant. They were supplied by WEG’s Benelux, branch in Belgium, to Hamon Thermal Europe, a cooling tower manufacturer, and subcontractors to De Smet Engineering and Contractors, partners of BioWanze in the mill construction project. The W22 line is a new generation of high efficiency motors; it excels in energy performance due to its ability to reduce motor losses by between 10% and 40% when compared to traditional AC induction motors. Moreover, the W22 units complement their excellent energy efficiency with low levels of noise and vibration in operation. The motors offer the key advantage that they already comply with and (in some cases) exceed all the requirements of IEC60034-30, the new harmonised IE (International Efficiency) grading standard for electric motors, which will be standard worldwide from June 2011. The design that enables them to achieve conformity includes an aerodynamic frame, which increases the air flow and reduces temperature. In addition, the terminal box of the motor is positioned to improve air flow over the motor. In practical terms this means less hot-spots and, consequently, improved reliability. The reliability and operating life of W22 motors is also extended by the innovative WSeal system. This has a W-ring with a metal cover, which protects the rubber sealing from harmful ultra-violet rays. The same design also ensures that the interior of the motor benefits from much higher levels of protection against the input of external agents, such as water and dust, which may cause damage to rolling bearings within the motor.

Achema 2022
As official media partner of the show, PCN Europe wil be at ACHEMA 2018. The editorial staff is eager to meet with readers and companies at Messe Frankfurt, Passage Hall 5.1-6.1 Stand B12, from June 11 to 15
Read more

Measurement & Instrumentation, Achema 2022
Endress+Hauser will be exhibiting at ACHEMA 2018 its portfolio of lab and process application solutions. The company is ready to face the challenges connected with industrial digitalization through a range of automation and measurement technologies
Read more

Explosion Protection & Safety, Achema 2022
Safety is a paramount concern nowadays and in Oral Solid Dosage production the main challenge is the protection of operating staff. This is why containment solutions for OSD are primarily focused on safety
Read more

Achema 2022
This advanced technology developed by the Universities of Glasgow, Strathclyde, the West of Scotland and Galway enables breakthrough in the culture of 3D mineralised bone tissue
Read more

Processing Machinery, Achema 2022
In this rapidly changing industrial scenario, ACHEMA represents the most important litmus test for many sectors, from Chemical to Biotechnology. PCN Europe interviewed Dr. Thomas Scheuring to get the details of this revolution
Read more

Achema 2022
The international emissions monitoring community will come to the historic city of Budapest to network, trade ideas and discuss technology, methods, applications, legislation and standardisation relevant to all atmospheric pollutants
Read more

Achema 2022
With over 900 speakers from around the world and over 180 sessions, ADIPEC provides one of the most comprehensive conference programmes in the world
Read more

Achema 2022
solves for challenges related to maintaining your equipment by automating tasks like bump tests, calibrations and recordkeeping.
Read more

Processing Machinery, Achema 2022
Available both as an off-line or in-line unit
Read more