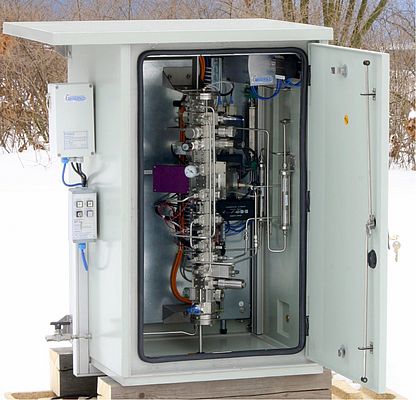 The inert gas pressurisation system InertSyst allows Intertec's protective cabinets or enclosures to house laboratory-style equipment that is non explosion protected - such as analyzers and sensors - in IEC-Ex and ATEX Zone 1, 21, 2 or 22 hazardous areas. The inert gas pressurisation option extends the types of equipment that plant instrumentation engineers can install in these protective enclosures - providing a choice of enclosure styles and opening formats, as well as climate protection accessories.

The Ex p system is certified for use where a hazardous atmosphere might be created inside the enclosure - due perhaps to a hydrocarbon leak from the analyzer equipment - as well as more conventional situations where a potential hazard is caused by the atmosphere outside the enclosure. The certification also applies to the system as a whole. This means that the principle can be used for virtually any application, without the need to seek re-certification from approvals agencies.

InertSyst - or inert gas purged system - works by maintaining a small overpressure inside the enclosure, in the order of 0.8 mbar, of an inert gas such as nitrogen or carbon dioxide. Many refineries and chemical facilities incorporate air separation plants to produce a source of nitrogen which is piped around the facility. If this is not available, the enclosure can be supplied from a standalone cylinder.

Intertec designs and manufactures probably the world's broadest selection of field protection enclosures and cabinets, and the new InertSyst gas purge system is suitable for use with most of these - up to sizes providing some 6000 litres capacity. The technique can accommodate enclosures fitted with intrinsically safe heaters of up to 400 W dissipation, provided that they are designated T3 or T4 and are ATEX approved. Typically this would comprise an Intertec explosion-proof electric heater and smart controller combination. The inert gas is introduced via a solenoid valve, controlled by an application-specific electronics module which monitors internal and external pressure; the minimum and maximum internal pressures are programmable. Intertec offers a choice of digital (on-off) or proportional solenoid valves, to best suit the application.

The nitrogen purging and pressurisation process depends upon the particular application and its environment. For Zone 1 or 2 applications, where an external explosive gas or vapour atmosphere might be present, the enclosure is initially thoroughly purged with nitrogen to remove all oxygen before any protected devices are energised. Zone 21 or 22 applications, where the potential hazard is created by dust in the atmosphere, do not require this initial purging.

Subsequently, provided that the instrumentation is not capable of leaking hazardous gas, the control module simply causes sufficient nitrogen to be injected periodically to compensate for natural leakage, maintaining a slight positive pressure inside the enclosure to prevent ingress of an explosive mixture. However, if the instrumentation is itself capable of compromising the integrity of the enclosure by leaking hydrocarbons, then the system has a continuous flow mode which continuously feeds a higher, but still carefully regulated, quantity of nitrogen through the enclosure to dilute the hazardous gas before dispersing it into the atmosphere.

When fitted with InertSyst, Intertec's enclosures fully comply with the IEC EN 60079-2 standard for equipment protection provided by pressurised enclosures in explosive atmospheres. The InertSyst is also available for cabinets and enclosures produced by other manufacturers.

Processing Machinery, Achema 2018
With a cooling system on a hybrid combination
Read more

Processing Machinery, Maintenance, Explosion Protection & Safety
An explosion-proof smart fluid heater provides fast and accurate temperature control in a closed-loop system at Chemring Marine Ltd, where it boosts the temperature of a flushing agent used in the manufacture of marine distress flares.
Read more
View all supplier's articles
Advertise with us
Related articles

Equipment & Services, Processing Machinery
30 years of tradition in chemical and pharmaceutical solids handling allow CO.RA. to guarantee its products based on strict norms. Design and development and manufacturing of products are based in Italy and a qualified service team supports customers worldwide, on-site and remotely.
Read more