With a cooling system on a hybrid combination 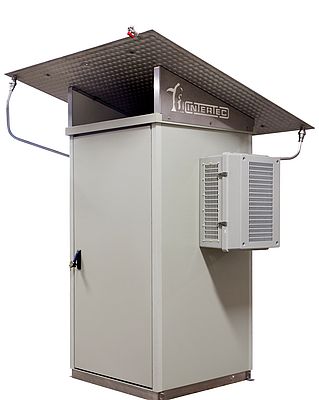 Intertec presents a novel new style of outdoor shelter for process plant applications. Featuring a cooling system based on a hybrid combination of unpowered passive and active powered technologies, the shelter helps to ensure stable and highly reliable operating environments for control, analyzer and instrumentation electronics. The new shelters can greatly simplify the operation of field equipment in hazardous and remote areas.

Passively cooled shelters work by exploiting the temperature swing over the climate's daily cycle. A buffer tank of water or other fluid provides the medium to store the coolness of the night and moderate internal temperatures during the day, via heat exchangers. Hybrid cooling can be achieved by additions such as solar-powered micro pumps to boost water circulation, or if mains electricity is available, by using a water chiller or air conditioner. Passively cooled shelters can also be made significantly smaller and lower cost by making them hybrid.

Intertec's hybrid shelter cooling concept is being demonstrated using a model with LED lighting effects that illustrate the natural circulation principle of passive cooling systems. Intertec's demonstration model also illustrates a radical new form of shelter configuration that can dramatically reduce plant building sizes, and greatly simplify construction and installation. Known as the Peri Shelter, it makes all the system components that are required for normal operation accessible via the building's exterior. Panel-mounting enclosures on the exterior provide access to electrical connection and I/O termination points, and cooling systems. Touchscreen HMI panels can also be fitted to external walls, allowing operators on the ground to monitor a control element such as a PLC or make adjustments to control programs locally via an inspection door.

Among many design problems and costs that can be avoided by the Peri Shelter's 'inside out' approach to layout are the need to make plant buildings blast proof and fire resistant because personnel might be inside, major reductions in size by eliminating desks, control panels, door opening spaces, aisles/walkways/escape routes etc, and much simpler internal atmospheric control requirements.

Processing Machinery, Maintenance, Explosion Protection & Safety
An explosion-proof smart fluid heater provides fast and accurate temperature control in a closed-loop system at Chemring Marine Ltd, where it boosts the temperature of a flushing agent used in the manufacture of marine distress flares.
Read more
View all supplier's articles
Advertise with us
Related articles

Achema 2018
For control of most regulators, small valves and pumps with pressure ranges from 0-0.5 psig to 0-3,000 psig
Read more

Achema 2018
The international emissions monitoring community will come to the historic city of Budapest to network, trade ideas and discuss technology, methods, applications, legislation and standardisation relevant to all atmospheric pollutants
Read more

Achema 2018
With over 900 speakers from around the world and over 180 sessions, ADIPEC provides one of the most comprehensive conference programmes in the world
Read more