The exceptional performance of such critical components thanks to high quality production and maintenance strategies, helping to optimize availability and minimize costs of a LDPE plant 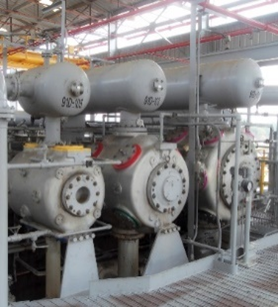 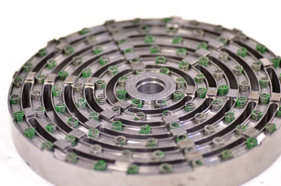 The production of Low Density Polyethylene (LDPE) require the application of special compressors to obtain the pressure necessary for the required product.

The Booster and Primary compressors (Fig.1), today combined in a multi-service unit, brings the pressure from low value up to the suction of the Hyper-compressor that feeds the reactor.

In this case the machine has 6 cylinder manufactured by Nuovo Pignone, now GE (Oil&Gas) (Fig.1).

The motor operates at 327 RPM with an absorbed power of about 4000 HP.

The suction pressure of the Booster is just above the atmospheric one, collecting the gas from the plant recovery system. The discharge of the Primary reaches 25 MPa to feed the Hyper-compressor.

The Hyper-compressor, designed and manufactured by Nuovo Pignone, now GE (Oil & Gas), is an 8-cylinder machine raising the pressure up to full reactor pressure.

On the Booster, which reaches a pressure of 2.6 MPa, the 3 cylinders are double acting. This machine has a total of 24 valves of Nuovo Pignone design and manufactured by COZZANI.

On the Primary operating up to 26 MPa the:

•  Two cylinders for 2nd and 3rd stages are single acting, and positioned on the same cylinder with a tandem arrangement (2nd and 3rd stg respectively inboard and outboard).

All the cylinders have been equipped with plastic piston and packing rings.

The lubrication of the cylinders is made with a mineral oil with lubricity additives and is the same applied for Booster/Primary and Hyper-compressor.

Great attention is paid to all details of the plant in order to achieve maximum operating time.

The valves represent important components that strongly influence the reliability of compressors and plant.

In the years following the 1983 commissioning, the decision was made to use predictive maintenance for determining when the valves should be replaced. Changes in gas temperature and inter-stage pressure were to be signals that valves were failing.

But in the first 13 years of plant life there were no issues. A lengthy turnaround in 1996 provided an opportunity to change out all valves on a proactive basis. A detailed inspection showed no problems.

After this shutdown, a preventative, time-based maintenance program was developed for the valves, which was more in line with standards elsewhere on site.

Today, bearings and valves are replaced on a time-based schedule.

During the scheduled shutdowns, the maintenance team also checks:

• One throw per shutdown for web deflection.

These inspections (generally every two years). Other work includes:

In operation, the monitoring includes:

The attention applied by the operators and reliability engineers has given the opportunity to keep the system continuously running apart from periodical inspections.

The whole set of 30 valves are equipped with metal rings in all stages of booster and primary.

The capacity control requires the use of finger type one-step unloading systems as well as continuous bypass control.

Because the gas involved is not corrosive, the material of seat and guards is the usual alloy steel AISI 4140.

The valve bolts for the seat/guard system were provided with a threaded connection including a surface treatment for a longer life. Castle type locknuts were used to prevent the assembly from loosening in service. These nuts also including an anti-friction surface layer to reduce damage during the maintenance so they may be re-used.

The design has been realized with the simulation programs available on the full operating range. Considering the heavy-duty application of the machines the manufacturing has been made according to quality control procedures.

Operating Behavior of the Valves

The valves are critical compressor components. Their performance has been checked by the analysis of pressure and temperature. The attention to any deviation from the design parameters and homogeneity of the valves of the same cylinder has been important to assess the good performance and therefore to continue the operation until a failure could be predicted.

Following the 1996 valve change, the next change was made in 2002 for all the valves. In 2006, the Primary 3rd stage valves were changed during re-ringing of the 3rd stage cylinders, as the cylinders were already largely dismantled.  All other valves remained in service.

In 2013, as part of the proactive replacement plan, the Booster and 1st stage Primary valves were reconditioned.

The last reconditioning activities were made in the service center of COZZANI in Magnolia, Texas, with the coordination of the compressor manufacturer and with the supervision of the manufacturer of the valves.

It must be noted that every reconditioning has been made according to the strict recommended procedure.

The original valves installed in a Booster-Primary compressor, have performed flawlessly from one proactive change-out to the next for 32 years. All replacement parts have been to the original 30+ year old design. Although potential design improvements can be offered, (plastic rings), the original work was perfect for this application and there is no thought of deviating from the original course. An added benefit is that no Reliability.

The operation of the whole LDPE plant has been very successful, with no time lost on the critical Booster/Primary compressor valves.