The new EtherCAT and TSN Technical Working Group had a kick-off meeting at the end of July. The meeting aims to extend the advantages of EtherCAT technology and combine them with TSN technology 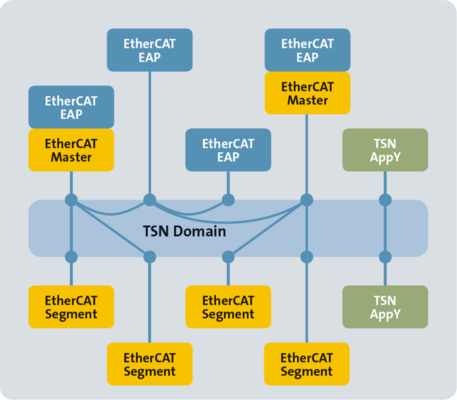 The new Technical Working Group (TWG), initiated by the EtherCAT Technology Group (ETG), had its first meeting at the end of July. Currently, 16 companies are represented in this TWG, among them two of the world's largest manufacturers of industrial switches, as well as other leading high-tech companies.

The TWG addresses the interworking of EtherCAT and TSN – a first version of the corresponding profile specification has been available since last year. A special feature of the ETG-proposed future use of TSN is that EtherCAT itself remains unchanged: It is not a new technology version, but an extension, that makes it possible to address EtherCAT segments through heterogeneous TSN networks. The advantages of EtherCAT technology are maintained and combined with the advantages of TSN technology.

The TWG highly values its cooperation with the IEEE 802.1 TSN Task Group (TG) and its formally established partnership with the JWG IEC/IEEE 60802 via a liaison. Many TWG companies also work together in the LNI 4.0 TSN Testbed. This helps achieve conformity not only for the EtherCAT TSN approach, but also to test the joint use of TSN networks with other manufacturers and technologies and address specification gaps. Like the ETG, LNI 4.0 is committed to small and medium-sized device manufacturers and machine builders. As a result, this group will receive an interoperable solution from a large number of providers shortly following the completion of TSN specification.

Just like cellulose, lignin and fats, proteins are renewable raw materials. Their potential for the chemical industry remains largely untapped. Researchers at the Fraunhofer Institute for Process Engineering and Packaging IVV want to change that.
Read more