Prototype for detecting missing pieces or parts that don’t belong 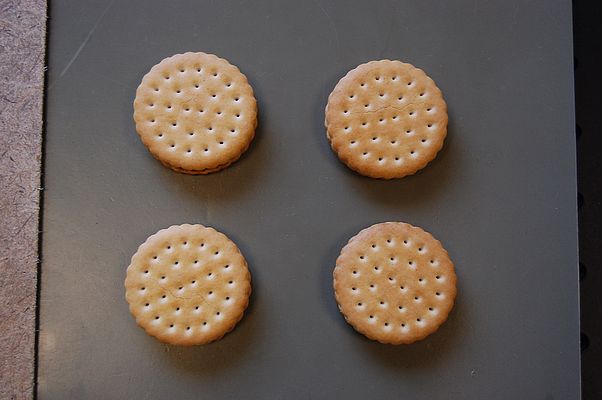 Did something that doesn’t belong in the sandwich cookies inadvertently end up there during manufacture? © Fraunhofer FHR 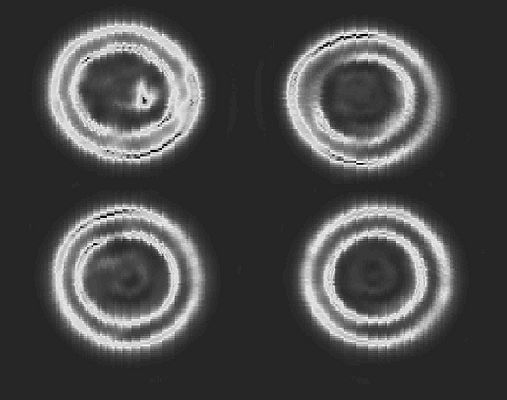 This radar image shows a glass splinter that was previously placed in the chocolate filling. © Fraunhofer FHR

Foreign objects – glass splinters, for example – that find their way into foods can be hazardous to consumers. Established X-ray techniques detect primarily metals – glass, plastic and wood pose a challenge. SAMMI®, a new prototype, fills this gap: using radar, it has already detected glass splinters in sandwich cookies, as well as missing pieces of chocolate in advent calendars.

Product recalls for food items continue to be a major problem: any number of things can go awry during manufacture and cause glass splinters, metal shavings, wood splinters or plastic pieces to end up in the product. Product recalls not only damage companies financially, they also result in a loss of consumer confidence. Manufacturers therefore have a keen interest in inspecting their products for foreign objects. Currently, they do this primarily with X-ray machines, but these do not reliably detect all foreign objects. While they can easily identify metals, they often have difficulty with plastics, wood and glass. This means that, despite inspections, there is still a certain residual risk for manufacturers.

SAMMI®, a prototype developed at the Fraunhofer Institute for High Frequency Physics and Radar Techniques FHR, can now close this gap and provide greater security in food production. “Our system is based on millimeter waves and can augment established X-ray techniques,” says Daniel Behrendt, business unit spokesperson at Fraunhofer FHR. “It detects the foreign matter that X-ray techniques can easily overlook – that is, glass splinters, plastics and wood. However, it is not able to penetrate metals, which in return is detected by X-ray techniques.” Another advantage of the technology is that the millimeter waves used to inspect the foods pose no health risk.

The inspection works as follows: the food is placed on a conveyor belt and transported through the machine. Above the conveyor, the transmitting antenna rotates and transmits its waves through the product; below it, the receiving antenna receives these waves. The millimeter waves are uniquely attenuated by each of the different food materials and undergo a specific delay in their transit time. This makes it possible to identify not only the structure and composition of the food, but also the slightest deviations from those – such as are caused by foreign objects, for instance. Assigning a pixel to each measurement point and encoding the changes with different colors produces an image of the investigated object on which the foreign matter is immediately evident. Even packaged goods can be inspected in this way, non-destructively and without physical contact. The prototype the researchers have set up at Fraunhofer FHR measures 40 x 40 x 30 centimeters and can be used to analyze foods measuring up to 30 x 30 x 5 centimeters. “But from a purely technological standpoint, there is no limit here,” says Behrendt.

Initial feasibility studies have already been completed. The researchers used SAMMI® to inspect sandwich cookies in which they had previously placed a glass splinter in the chocolate filling. Their efforts met with success: the prototype reliably detected the foreign objects. SAMMI® also performed well when inspecting an advent calendar: the radar image showed clearly that three pieces of chocolate were missing, but that all others were present and correctly positioned. In an additional step, the research team now wants to further improve the inspection speed and the precision.

But food inspection is just one application for which this technology is suitable. The system offers advantages, for instance, in non-destructive product testing: in an advent calendar inspection, it shows, for example, whether the adhesive dots were applied with sufficient thickness to hold the calendar together. Hübner Photonics is already marketing this system for the inspection of letters and small packages, calling it T-SENSE®.