Nine young Emiratis from the 2013 edition were invited to participate in the current edition of Young Adipec Programme, with the aim of encouraging other students to launch their careers 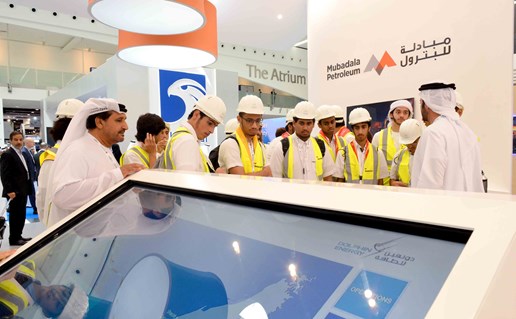 Held under the patronage of His Highness Sheikh Khalifa Bin Zayed Al Nahyan, President of the UAE, hosted by the Abu Dhabi National Oil Company (ADNOC), and organised by the Global Energy division of dmg events, ADIPEC is one of the world’s leading oil and gas events, and the largest in Africa and the Middle East. ADIPEC will be held at Abu Dhabi National Exhibition Centre from 13 to 16 November 2017.

Past edition students are back

Nine young Emiratis, who took part in the very first Young ADIPEC Programme of the Abu Dhabi International Petroleum Exhibition and Conference (ADIPEC), will be returning to this year’s event to encourage others to follow in their footsteps as they launch their careers.

The students, who were all part of the first edition of Young ADIPEC in 2013, will attend the 2017 edition as part of a new Young ADIPEC Alumni initiative. They will speak at the Young ADIPEC Forum – a series of TED-style talks designed to engage and inspire young people to pursue energy-related careers – with panellists sharing the experiences that influenced their educational choices, as well as their hopes for the future.

Each of the students credits Young ADIPEC with helping them make a positive choice at a time when they were unsure about which path to take in life.

“In 2013, before participating in the Young ADIPEC programme, I had no idea what engineering was,” said Alreem Alhammadi, who is now a chemical engineering student at the Petroleum Institute. “I never thought I would end up where I am today, so I am truly thankful to this programme. It directed me towards this path which I certainly like and enjoy.”

Measurement & Instrumentation
PR electronics’ new PR 5437 features a unique high-density 7-terminal design, providing a wide selection of dual-sensor input combinations on the market. From 2 x 4-wire RTDs to potentiometer inputs, there is no longer any compromise on sensor types. It allows customers to protect high-integrity process measurements, e.g. in flare stacks or reactors, with an automatic backup in the event of primary...
Read more