125 Years in up to Date Bulk Processing

From humble beginnings in the year 1894, the company Gericke evolved into a globally positioned and successful provider of solutions in the bulk goods industry 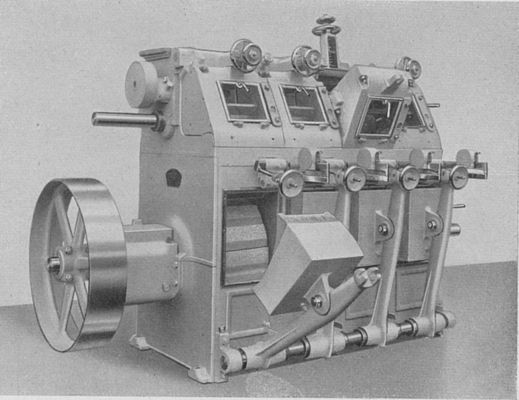 125 Years in up to Date Bulk Processing

1894 in the heart of Zürich Ing. Walter H. Gericke founded his machine and mill building factory. He attained quickly an excellent reputation as a specialist and as a reliable supplier of modern, partly already automated, milling plants. He sold roller mills from the prestigious company Seck from Dresden. Other important process steps involved particularly corn cleaning, storing, conveying, sifting and mixing grains and flours. The vast array of machines was already widely-ranged.

At the beginning of the 20th century Gericke constructed its first vertical mixers and celebrated a major success with the patented „Soder-mills“, which resulted a higher yield. Innovation was in the foreground in the 40’s with the construction of pneumatic conveying systems and vibrational dosing unit or with steel band conveyors for chocolate industries. In this period of time the second generation with Otto and Walter Gericke was already standing at the helm.

From the 60’s on Dr. Hermann and Willi Gericke set significant milestones with the internationalization. New technologies remained in the focus, whereby less common types of machines succeeded into the program through license agreements with US companies. The types of machines included the differential weigh feeder, the sack compactor and the continuous granulators. The target market has long included new emerging industries such as the chemical and food industries. Machinery for the production of high-quality children's food was already a core competence of the company back then.

Markus Gericke is leading the company in the 4th generation. Although the engineering and the construction competence has been extended to new locations like Asia, United States of America and South America the reliability and durability of machines and installations stand for Swiss quality. The Gericke Group today is employing worldwide over 300 employees in 12 different locations, which renders customer’s closeness with local teams.