Electromagnetic Flowmeter for Pipes up to DN 400 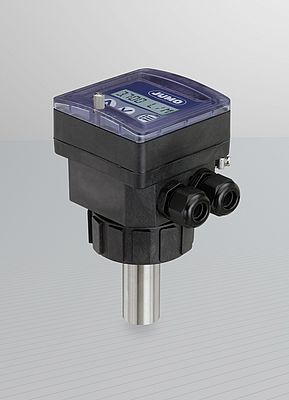 Electromagnetic Flowmeter for Pipes up to DN 400

The JUMO flowTRANS MAG I02 flowmeter can be used to measure conductive liquids in pipes with nominal widths from DN 15 to DN 400. This device is equipped with two counters so that the flow rate or, optionally, the volume can be shown on the backlit display. The minimum conductivity of the measurement medium must be greater than 20 µS/cm; the maximum temperature lies at 110 °C. Flow velocity must be in the measuring range from 0.2 to 10 m/s. JUMO flowTRANS MAG I02 has an analog output, a transistor output, two relay outputs, and a digital input.

The flowmeter can display the volume, the value of the current output, as well as independent daily and main counters. FlowTRANS MAG I02 can be mounted horizontally or vertically, which is a real advantage in confined spaces. The combined assembly out of electronic components and sensor element is screwed directly into the fitting so that the entire measuring unit can be replaced independently of the pipe. The status of the outputs can be identified at any time through the integrated status LED. In the event of a malfunction, the analog output can issue an alarm current of 22 mA in order to activate the automatic error detection function in connected systems such as a PLC. This increases plant safety and process reliability.

Due to the use of CIP and FDA compliant materials, the JUMO flowTRANS MAG I02 can be used in a wide range of industries and applications.

Measurement & Instrumentation
Clean and ultra cleanrooms are required for special production methods – especially in medicine and pharmaceutical technology, since particles in ordinary ambient air would have an adverse effect.
Read more

When the Going Gets Tough