Miniature Spectrometer for the Smartphone 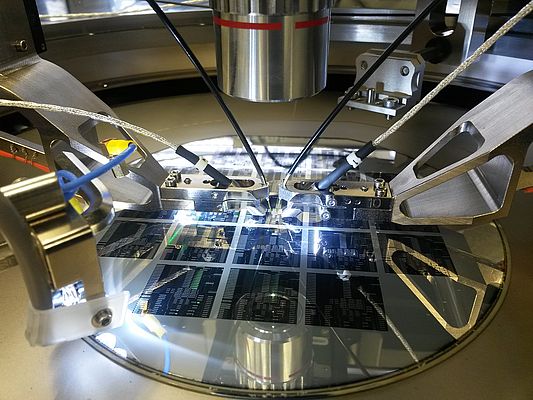 Recognizing fake drugs? Testing water samples ourselves? Checking the quality of air? In the future, it could be possible to do all this using a smartphone in a quick, cost-effective and straightforward way. The process is being made possible by a spectrometer, weighing just one gram, from the Fraunhofer Institute for Electronic Nano Systems ENAS. The aim is to mass-produce this component for around a euro using conventional technologies.

Websites sometimes offer drugs at a much lower price than pharmacies. While we can be sure that the medicines we buy from local stores are the quality we expect, online bargains often lead us to question whether we are being palmed off with an ineffective or a differently composed counterfeit. In the future, we will be able to find out quickly and easily: Using a chip spectrometer currently being developed by researchers at Fraunhofer ENAS. “Our infrared spectrometer weighs only about a gram and we plan for it to cost less than a euro to produce,” says Dr. Alexander Weiß, Head of Department Multi Device Integration at Fraunhofer ENAS. “This will allow it to be integrated into smartphones, for instance.” As a comparison: At present, infrared spectrometers weigh several kilograms and cost thousands of euros to produce. Although transportable devices weighing slightly less do exist, they are unsuitable for the mass market – in terms of cost and size and also in terms of operation and analyzing the results. Other requirements crucial to existing on the mass market: The technology must not be overly complex – in other words, it must be easy to operate – and the production method must be suitable for the mass market.

The potential applications are by no means limited to counterfeit drugs. “Our spectrometer lends itself to all kinds of uses – such as assessing the maturity or microbial decomposition of foods for human and animal consumption, measuring the air quality of interiors and vehicles for effective climate control or detecting pollutants in air, water or foodstuffs.” Just like conventional infrared spectrometers, this spectrometer does this by emitting light beams in the infrared range. The light of different wavelengths is then fragmented using a tunable filter and conducted to a detector by means of integrated waveguides. Grating couplers with nanostructures bundle the light reflected by a pill to be tested, for example, into integrated waveguides. If the air quality is to be tested, the light enters a special absorption cell integrated in one plane instead. If we plot how much light reaches the detector at which wavelength, we get a characteristic spectrum that is different for each sample, similar to a fingerprint. A fake pill, with different ingredients, therefore has a different spectrum to that of the original drug.

But how did the researcher team manage to reduce the size of the spectrometer so drastically yet still achieve a similar general functionality? “Conventional spectrometers usually consist of discrete more or less well integrated components. We, on the other hand, integrated the beam guidance, the splitting of the individual wavelengths and the detection function in one plane – we are therefore also calling this an inplane spectrometer,” explains Weiß.

Easy to operate, inexpensive to produce

If the spectrometer is to be capable of being integrated into smartphones, for example, we have to think about more than size. Operation must be easy and intuitive and the system must then provide the user with clear evaluations. The researchers have already developed a concept: Smart learning algorithms. “If many people use the technology, the system will learn quickly,” says Weiß. The user will simply need to pull out their phone, start the spectrometer via a special app and hold it over one of the pills. They will also see an instruction that guides them through the measurement process. The spectrometer generates the spectrum automatically and the software compares it to reference spectra entered into a database by specialists beforehand. The more people who come to use the system, the greater the possibility for making comparisons. The user sees only the result, “original drug”, for example. Another sticking point is the cost of producing the spectrometer. The researchers had this in mind from the outset too. “We designed the spectrometer in a way that would allow it to be mass-produced inexpensively using conventional microsystems engineering technologies. Manufacturers can use the processes that are standard on the large fabrication lines, fabs for short,” explains Weiß.

The researchers have already produced the first spectrometer chips and provided proof of concept. A number of different characterizations are now on the agenda: Do the individual components move as we want them to? Is the light that is coupled into the waveguide transmitted as it should be? The equipment required for these characterizations has been financed by the Research Fab Microelectronics Germany. If these investigations go as hoped, the spectrometer could be on its way to the mass market in around two years’ time.