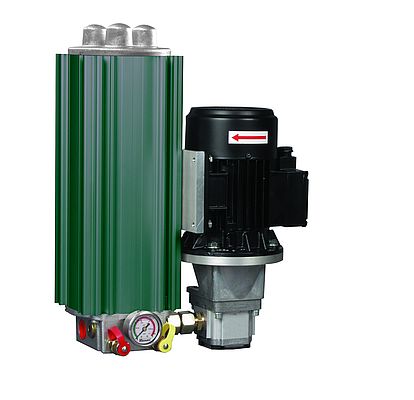 In principle, the subject matter only measures between one and three microns. That’s how fine the dirt particles are that can cause contamination in the hydraulic systems of injection moulding machines. The filters used on the machines are equipped with filter grades of between three and ten microns. This means that particle sizes of less than three microns can only be caught to a certain extent. But it is especially the concentration of ultra-fine particles that causes intense wear on the hydraulic components. Because conventional filters that function in the main stream only remove particles up to three microns, a so-called offline filter with an integrated motor pump unit has been developed by Stauff. Using this offline filter system (OLS), practical tests carried out with a renowned operator of injection moulding machines showed significant improvements in the purity class according to ISO 4406, namely from 15/13/10 (pressure filtration three microns) to 14/11/8. This result speaks in favour of Stauff’s strategy to back slow but highly effective filtration in the so-called bypass flow. With this technology, the fluid is drawn off the hydraulic system and passes through an ultrafine, purpose-developed cellulose medium that removes even the tiniest particles of less than one micron. The compact offline filter is easily installed in the hydraulic system of the machine and works independent of the plant cycle, even when the injection moulding machine is at a standstill. Edited by Constanze Schmitz

Over the last 50 years, STAUFF has become a leading supplier of accessories in the hydraulics industry. From the beginning, STAUFF has focused on market requirements, offering high-quality products in conjunction with outstanding service. STAUFF is tuned in to the needs of the global market and this, together with the benefit of an experienced and highly motivated team of employees and the use of innovative technology, enables the company to offer a sophisticated product range which will satisfy the requirements of each and every customer worldwide.

Measurement & Instrumentation, Maintenance
More durable and resistant than before, thanks to the even more robust design of the actual cases and the foam inserts
Read more

Pumps, Valves & Compressors
These valves developed by Stauff can protect pressure gauges and other measuring and display devices against the harmful effects of pressure peaks and frequent load changes
Read more

Measurement & Instrumentation, Maintenance
the use of these transmitters in a hydraulic system allows for the wireless collection of pressure data without having to connect any measuring devices to the user’s equipment
Read more

Manufacturer and supplier of pipework

Achema 2018
made of stainless steel, brass and other high-quality alloys
Read more

Achema 2018
made of stainless steel, brass and other high-quality alloys
Read more

Achema 2018
As official media partner of the show, PCN Europe wil be at ACHEMA 2018. The editorial staff is eager to meet with readers and companies at Messe Frankfurt, Passage Hall 5.1-6.1 Stand B12, from June 11 to 15
Read more

Measurement & Instrumentation, Achema 2018
Endress+Hauser will be exhibiting at ACHEMA 2018 its portfolio of lab and process application solutions. The company is ready to face the challenges connected with industrial digitalization through a range of automation and measurement technologies
Read more

Explosion Protection & Safety, Achema 2018
Safety is a paramount concern nowadays and in Oral Solid Dosage production the main challenge is the protection of operating staff. This is why containment solutions for OSD are primarily focused on safety
Read more

Achema 2018
This advanced technology developed by the Universities of Glasgow, Strathclyde, the West of Scotland and Galway enables breakthrough in the culture of 3D mineralised bone tissue
Read more

Processing Machinery, Achema 2018
In this rapidly changing industrial scenario, ACHEMA represents the most important litmus test for many sectors, from Chemical to Biotechnology. PCN Europe interviewed Dr. Thomas Scheuring to get the details of this revolution
Read more

Achema 2018
The international emissions monitoring community will come to the historic city of Budapest to network, trade ideas and discuss technology, methods, applications, legislation and standardisation relevant to all atmospheric pollutants
Read more

Achema 2018
With over 900 speakers from around the world and over 180 sessions, ADIPEC provides one of the most comprehensive conference programmes in the world
Read more

Achema 2018
solves for challenges related to maintaining your equipment by automating tasks like bump tests, calibrations and recordkeeping.
Read more