under extreme conditions in oilfield 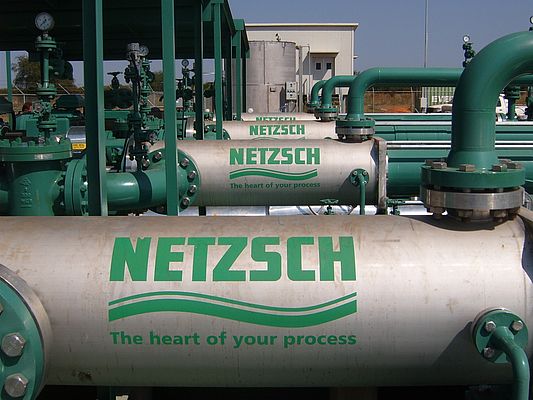 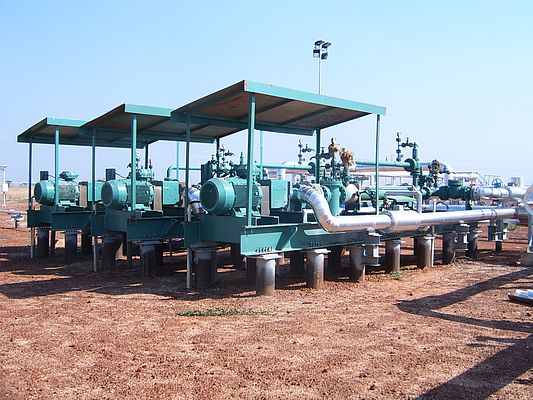 Multiphase pumps transport a mixture of oil, water, gas and sand, which has been pumped out of the Sudanese desert soil from the remote sources over large distances to the processing site

Sudan produces around 500,000 barrels of crude oil every day, about 200,000 of which come from the fields in the Melut Basin in the south of the country. Before it can be used or exported, the mixture of oil, water, gas and sand which has been pumped out of the desert soil must however first be transported from the remote sources over large distances to the processing site. Multiphase pumps are being used to do this.

These progressing cavity pumps are specially designed for changes in the consistency of the medium and a high solid content, so that they provide reliable pumping performances over long periods of time, without any failures or high levels of wear. Since temperatures of up to 50°C are reached in the Melut Basin and sandstorms and downpours alternate through the year, the pumps used there are exposed to an extraordinary strain, which must be catered for when the pumps are designed.

An estimated 900 million barrels lie under the Palogue Oilfield, the largest in the rift valley area, south of the Sudanese capital, Khartoum. 2005 saw the start of PetroDar, an international consortium of various oil companies, with the conveyance of the black gold, which is distributed across different deposits. The oil, still in its untreated state, was to be taken from these to central treatment facilities (CTFs) and then around 1,300 km further to Port Sudan via a pipeline with six conveying stations. Certainly, bridging the first transport section from the borehole to the CTF is problematic, since the composition of the crude medium being conveyed is constantly changing. Above all, high proportions of gas and sand can lead to conveyance failures, pressure losses and equipment damage on various types of pump in the process. The NEMO progressing cavity pumps manufactured by NETZSCH can cope with these difficult conditions without suffering any damage. At the request of the operating consortium, the company’s oil & gas special pumps team developed a solution which was tailored to the specific starting point.

Firstly, 20 multiphase pumps were divided up into several blocks, each of which is designed to take up the output from up to 24 oil wells and to convey it to the nearest treatment plant. The stretches which had to be negotiated in the process are sometimes 15 km long with an ambient temperature of up to 50°C and surface temperatures of up to 70°C. In order to reduce the risk of damage and the maintenance workload as far as possible in view of the remoteness of the location, the pumps were mounted on skids, so that they are not standing in water when it rains. A simple sunroof provides protection from too much heat. In addition, out of the wide range of available joint options, the choice was made to use Z pivot joints, as these stand out due to their being particularly robust.

The pump system itself is based on progressing cavity technology. A helix rotor rotates within a helix stator, so as to form conveying chambers which move from the inlet to the discharge side with the rotation. In this way, hardly any shear forces or pulsation arise and the unwanted emulsion formation with oil-water mixtures is avoided. In addition, the flow rate for this process remains stable, even with high proportions of sand or gas – an important aspect for the fields in the Melut Basin, as the gas-oil ratio (GOR) here can be 50 SCFD per barrel. In order to be able to cope with pumping capacities which are sometimes very high, one of the largest multiphase pumps in the range was used, with an output of 250m³ per hour.

The whole order was manufactured and delivered within three months. As well as the oil pumps, the scope of delivery also included the drive systems, including the control system, filters for the inlet basket, stop valves, check valves and relief valves, along with return pipework and lubrication injection pumps. As time was short, the first of the pumps weighing up to 10 t were flown to Sudan specifically with an Antonov AN-124, one of the largest transport aircraft in the world, while the remaining ones were transported by sea.

Since then the 20 multiphase pumps have been providing their service for more than six years in the Melut Basin. At the end of 2011, the developers asked the operators about their experiences so far and checked the condition of the equipment, which had been running without any significant problems up to that point. Above all the pivot joints proved themselves over sustained use: since then no maintenance work has been needed either on the joints, the drive chain or the bearing housing. Wear had only occurred on the stators and mechanical seals of some pumps, which had to transport extremely large quantities of sand in the pumped material, meaning that these components had to be replaced. On the other hand, many of the pumps which were not used in such particular load phases are still running with the original stator, in spite of the hard working environment and the difficult conveyance conditions.

Pumps, Valves & Compressors
under extreme conditions in oilfield
Share with
Print
Advertise with us
More products from this supplier

Reliable Pumping on a Floating Production Storage and Offloading Unit

Pumps, Valves & Compressors
A rotary lobe, a multi screw and a progressing cavity pump – on a floating production and storage unit on the high seas, optimally solve a range of pumping tasks with displacement pumps from a single source.
Read more

Pumps, Valves & Compressors, Maintenance
The high-quality, wear-resistant shaft bearing, lubricated for life, and the oil-free synchronizing belt drive get by without any preventative maintenance
Read more

Pumps, Valves & Compressors
Now you can completely maintain the NEMO® Progressive Cavity Pump without removing it from the pipework, without special tools – and in half the time. Ask for our conversion sets or buy into the new FSIP®-modular technology
Read more

Pumps, Valves & Compressors
You save energy thanks to our latest pump technology and clever design. The reduced energy requirement in parallel to increased pump performance lowers the power consumption and so preserves our environment in a sustainable way
Read more

Pumps, Valves & Compressors
As an expert manufacturer of downhole and surface pumps, Netsch produces oilfield pump systems according to highest quality standards. The viscosity of crude oil or its percentage of gas or sand makes no difference to the progressing cavity pumps
Read more

Pumps for sanitary and aseptic products

Pumps, Valves & Compressors
Users can save energy thanks to Netzsch's latest pump technology and clever design. The reduced energy requirement in parallel to increased pump performance lowers the power consumption and so preserves the environment in a sustainable way.
Read more

Pumps, Valves & Compressors
NETZSCH, produces oilfield pump systems for onshore, offshore, upstream or downstream applications. The viscosity of crude oil or its percentage of gas or sand makes no difference to the progressing cavity pumps, and their helical rotor system.
Read more

Pumps, Valves & Compressors
Netzsch's Nemo aseptic pumps for gentle conveyance of sanitary and aseptic products offer flow rates up to 140m³/h and pressures up to 24 bar. The pumps are designed, manufactured and tested according to EHEDG, QHD, 3A and GOST-R standards.
Read more

Pumps, Valves & Compressors
For use in a wide range of applications with low flow rates
Read more