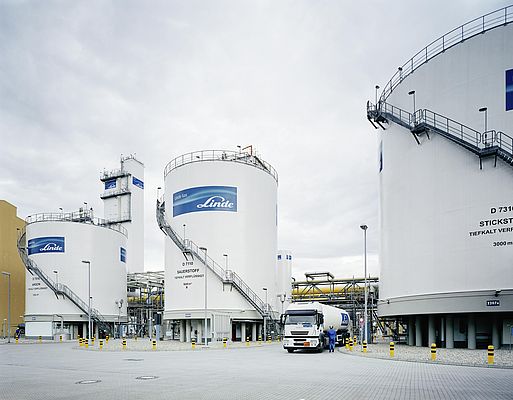 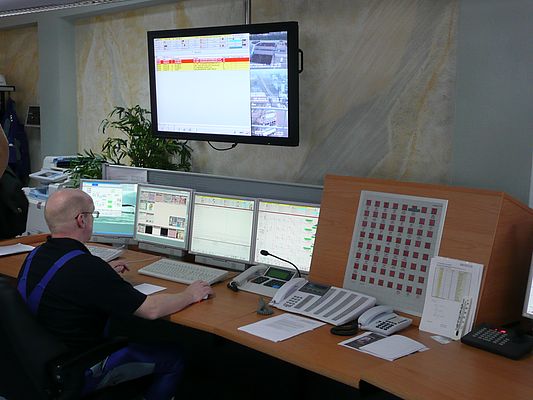 During modernization of the control technology at its gas production center in Leuna, Linde Gas needed a tailored concept combined with safe and economical implementation.

Thanks to modern production plants, regular quality controls, and maximum supply reliability, Linde Gas, a division of Linde AG, is the leading provider of industrial gases in Germany and Europe, and is also one of the top global suppliers. During modernization of the control technology at its gas production center in Leuna, Linde Gas placed the same demands on the migration as already used for their own service philosophy: a tailored concept combined with safe and economical implementation.

Whether liquid hydrogen for the semiconductor industry, pure oxygen for refineries and steel works, or liquid nitrogen for cryogenic processes – a gas supply suitable for the requirements is indispensable in practically all branches of industry. At its gas production center in Leuna (Saxony-Anhalt/Germany) – its largest plant in Europe – Linde produces technical, medical, food and special gases for numerous sectors.

The largest customer for the produced oxygen is the nearby refinery of Total, the fuel company. During the processing of crude oil, heavy and complex carbon compounds are converted with the assistance of the gas directly supplied via pipelines into lighter hydrocarbons and methanol. To enable fault-free production, the refinery depends on a continuous supply of oxygen from Linde Gas.

In order to guarantee a reliable supply in the future, Linde Gas decided to completely modernize the old plant control technology. Bottlenecks in the supply of spare parts for the previously used systems from other vendors and an increased failure probability of the modules represented a growing risk for trouble-free production.

High demands were placed on the successor system and the migration: the standstill time during the conversion had to be as short as possible, and the connected refinery had to be subsequently supplied with gas immediately and without any further interruptions. It was intended to continue using the installed sensors and actuators as far as possible. Since Linde did not want to link the safety-related part of the system in the future via complicated interfaces, a control system with integral safety technology was essential. Furthermore, the control systems of various air separators had to be included: in addition to the ASP 7 to be renovated, ASP 8 and a further plant located a few kilometers away in Buna were also to be operated and monitored from a central control room in Leuna. This meant that the existing control desk had to be completely modernized. Linde also wanted to update the control technology of a hydrogen filling plant and bring the safety technology up to the state-of-the-art.

A control system which could satisfy all these high demands was quickly found: Simatic PCS7, the process control system from Siemens. For some time already, it has been controlling the ASP 8 and the air separator in Buna. In addition to the openness required for integration of existing sensors and actuators as well as the control systems of the individual plants, this system offers many advantages, such as integral safety technology with uniform central engineering. Linde commissioned Siemens AG with the comprehensive modernization project, and was thus provided with tailored migration strategies as well as the know-how of certified Siemens Solution Partners such as Finze & Wagner EMSR Ingenieurgesellschaft mbH (FiWa). Finze & Wagner has already proven its first class know-how in several migration projects. Linde belongs to the established clientele of the Bavarian company.

The engineers provided support to Linde in creating the migration strategy for the control and safety technology as well as for the automation systems, and then implemented it in an exemplary manner. The old fail-safe controllers and emergency stop relays were replaced by fault-tolerant Simatic S7-400 PLCs from Siemens, the I/O devices by distributed I/O modules, and the field, plant and terminal buses were completely re-designed. The complete sensor and actuator systems – representing an enormous plant value with approx. 8,000 measuring points – remained largely unchanged. Since a new HAZOP study (Hazard and Operability) was to be implemented during the modernization of the hydrogen filling plant, it was necessary to replace a number of temperature, pressure and level sensors with SIL 1 or SIL 2 compatible devices. The technology, which had to comply with SIL 1 or SIL 2, was transferred to fail-safe modules.

By using Siemens technology it was possible to omit tedious bus interfacing. A total of eleven automation systems – nine of which have a fault-tolerant design – are now used in various parts of the plant such as air, oxygen and nitrogen compression, the cooling plant, heat extraction, hydrogen filling, and the tank farm. Profibus is used as the fieldbus. The plant bus which extends over eleven buildings was designed completely new with a ring topology, with the ring being routed in separate paths. A total of 28 Industrial Ethernet switches now reliably supply all data to the corresponding addressees. At the HMI level, Industrial Ethernet is used as a terminal bus. In order to ensure the highest possible availability, redundant server pairs are used. Process data is visualized on a total of eight clients. In addition, the specialists from FiWa and Jungmann Systemtechnik renewed the complete control room in accordance with the Linde specifications. Separate server rooms as well as modern large-screen technology with cameras for access control make the work for the control room personnel noticeably easier.

Migration of the application software with a scope of more than 10,000 I/Os was a true challenge to the configuration experts. Since the fundamental points and the philosophy of the old and new control systems are so different, a complete 1:1 migration was neither possible nor meaningful. The software was therefore converted to a large extent on a functional basis: for example, standardized typicals were used for certain processes such as valve control. Linde thus fully utilized the advantages of the Simatic PCS7 process control system for operation and interconnections. Old and complicated logic functions could be replaced by standard blocks from the Linde library. This not only simplifies troubleshooting, but also facilitates convenient configuration and saves costs in the case of subsequent updating.

The Factory Acceptance Test (FAT) for checking the completeness and functionality of the new technology was carried out directly on site as requested by the customer. It was specified that the conversion time was to take no longer than 20 days under any circumstances, therefore particular attention was applied to this system test.

In an initial internal FAT, the complete I/O level was tested. Using a simulation tool, all individual control functions and interconnected functions of the plant could be simulated and tested. A subsequent FAT together with the customer allowed a certain degree of process optimization to be carried out. This intensive preliminary work guaranteed that the plant could be operated 100 percent fault-free following the conversion – and not only this: just 17 days were required instead of the planned 20 days. This meant that test operation could be brought forward by three days, thus significantly shortening the undesirable standstill time.

The customer was very satisfied with the service provided by Siemens and its Solution Partner: "We were convinced by the project coordination and the technology of the Simatic PCS7 process control system," praised Hans-Jochen Schneeloch, Head of Electrical Services at Linde Gas.

Automation & Communication
Thanks to the Digital Era, which is spreading over many industries, the modularization of process plants and the corresponding requirements for the automation systems need to be rearranged
Read more

Automation & Communication
Infrastructure architects are not able to allow for every unforeseen factor. While the list of possible causes is endless, the result is always the same. Network disputation and downtime.
Read more

Why You Need PAT to Move From Batch to Continuous Processing

Automation & Communication
Unitronics has supplied to B3Servis d.o.o. the solution for the retrofit of outdated machines in order to keep a competitive market edge
Read more
Request information